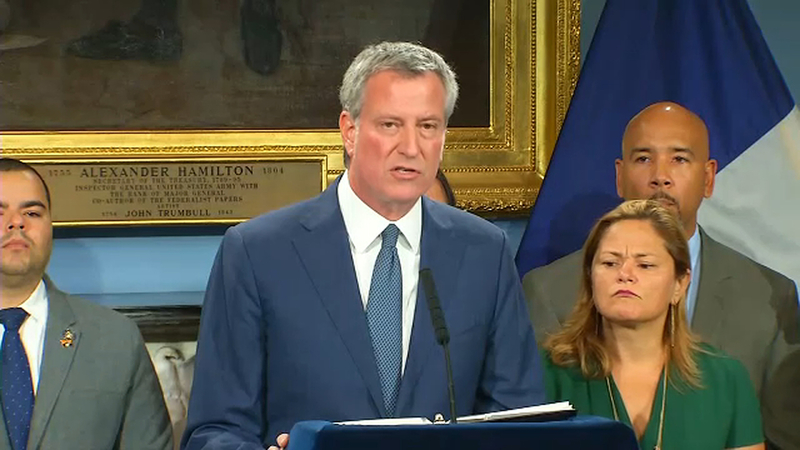 City Council Speaker Mellissa Mark-Viverito said she's been able to briefly talk with her mother in Puerto Rico, but she doesn't know about other family members and she's worried.

"To say this is a trying time is an understatement for all of us standing here. It is deeply personal," Mark-Viverito said.

The mayor outlined several different ways city officials are responding to Hurricane Maria, an unprecedented storm that knocked out power to 3.8 million people and the worst hurricane to hit a U.S. territory in the last 90 years.

The mayor said nine police officers in San Juan for Hurricane Irma have elected to stay and help with the aftermath of Maria. Also, a team of 27 firefighters and police officers are now at Stewart International Airport waiting for permission to fly into San Juan. In the next couple of days a team of 8 to 10 city emergency officials will also help coordinate with San Juan officials on rescues and response to the storm.

"There are three and-a-half million Americans living through a nightmare, the people of Puerto Rico, an island we feel so close to here in New York City," Mayor de Blasio said. "My message to all Puerto Ricans is New York City stands with you and we will be there to help."

Congresswoman Nydia Velazquez (D-New York) moved from Puerto Rico when she was 19. She also spoke today at City Hall and at times grew emotional about her effort to reach her brothers and sister near San Juan. She is from Yabucoa, where Maria made landfall at 6:15 a.m. Wednesday. The storm was so powerful it knocked out radar, weather and cellphone towers.