Demonstrators gather to remember Rikers inmates who have died in custody, call for action 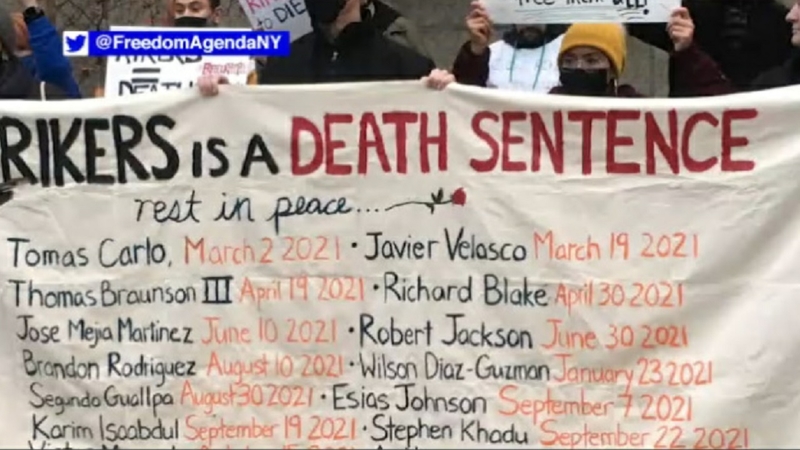 Demonstrators gather to remember Rikers inmates who have died in custody, call for action

LOWER MANHATTAN, Manhattan (WABC) -- Candles were lit in Lower Manhattan to remember the 15 Rikers inmates who have died this year in custody - the latest one happening Friday.

Demonstrators gathered to raise awareness, to remember their loved ones, and to call for more to be done to prevent any additional deaths.

Thomas Earl Braunson III, 35, has an infant daughter - she was two and a half months old when he passed. He will not be around to see her future, and she will never know her father.

"Thomas loved all people. He loved his family. He was the person that everybody looked for at family gatherings because he was the one that brings the life to the party," said a family member.

Sharon Gross-Gill was among the demonstrators Friday who took part in what they called the Day of Action for Decarceration. From the Bronx, Queens, Brooklyn - to a candlelight vigil outside Criminal Court in Lower Manhattan.

In the middle of their protest, they learned of yet another death at Rikers - 28-year-old Malcolm Boatwright, who entered Rikers on November 12. He became the 15th inmate to die.

Boatwright died at Bellevue Hospital. His cause of death is under investigation.

Many at Rikers are still awaiting trial, and are innocent until proven guilty.
"They're not just inmates or people that are sitting there because they omitted a crime or like I like to say, they were accused of a crime. They haven't had a day in court," said Edwin Santana.

Advocates say they are living in uncertainty, unsure about what Eric Adams will do about Rikers. They are disappointed that Mayor de Blasio did not finish the job.

One thing the advocates are certain about - they will be out there until they see the change they are calling for.