On schedule: Penn Station to resume normal service on September 5 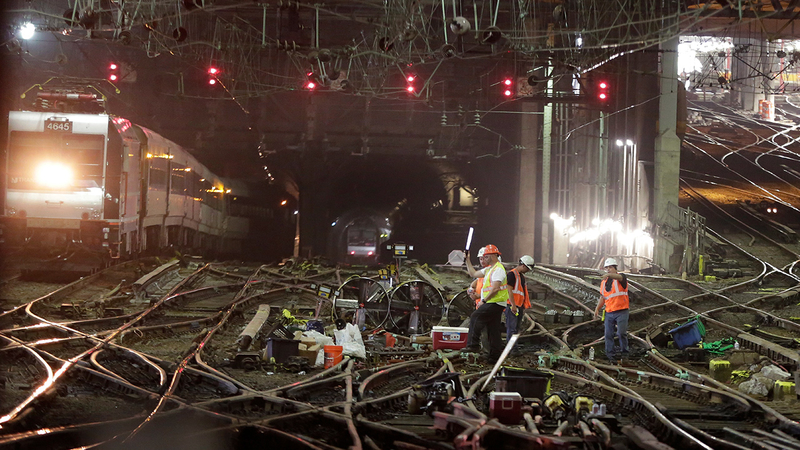 On schedule: Penn Station to resume normal service on September 5

NEW YORK CITY (WABC) -- The end is in sight for the so-called "summer of hell" as Penn Station repair work is on schedule and nearing its conclusion.

"We thank customers for their patience while we renew the infrastructure at New York Penn Station," Amtrak co-CEO Wick Moorman said. "We also appreciate the collaboration and support of our commuter partners, NJ Transit and the Long Island Rail Road. Our engineering forces are making great progress, and we look forward to resuming scheduled operations September 5."

To date, Amtrak engineering forces have completed nearly seven of the eight weeks of the summer infrastructure renewal work. It focused on "A Interlocking," the critical sorting mechanism routing incoming and outgoing trains that enter and exit Penn Station from the Hudson River tunnel and the LIRR's West Side Yard to the various station tracks and platforms.

It included total track and switch replacement and is expected to improve the reliability of train service through the area in Penn Station.

The resumption of regular schedules includes all previously announced modified routes at New York Penn station, as well as Empire Service trains, which will be returning to Penn Station for all arrivals and departures.

Additional work will last through approximately June 2018, with most of it taking place on weekends to lessen the impact to customers.

The LIRR and New Jersey Transit also detailed their plans to resume normal service on September 5.

The MTA says discounted fares for traveling to alternative stations will end effective Friday, September 1, and temporary bus and ferry service put in place as alternative travel options for LIRR ticket holders will no longer operate after September 1.

"Our goal was to provide our customers with a range of alternative travel options and planning tools to limit the repair work's impact on the daily commute," MTA Chairman Joe Lhota said. "I want to thank our customers for their patience and willingness to try the temporary travel options, as well as our employees for their hard work to make the transition as smooth as possible. Together, we were all able to get where we needed to go this summer with minimal disruption, and we are pleased that our customers will return from the Labor Day holiday to their regular timetables."

NJ Transit officials said Morris and Essex Lines Midtown Direct trains will resume service to and from Penn Station and will no longer be diverted to Hoboken, while North Jersey Coast Line trains also will resume operating into Hoboken Terminal.

"I want to thank our customers for their patience and flexibility during the summer months," executive director Steven Santoro said. "While many had to adjust their personal schedules, we tried to provide them with enough options and support to make the transition as smooth as possible. We also monitored travel patterns throughout the summer and made service adjustments as needed."