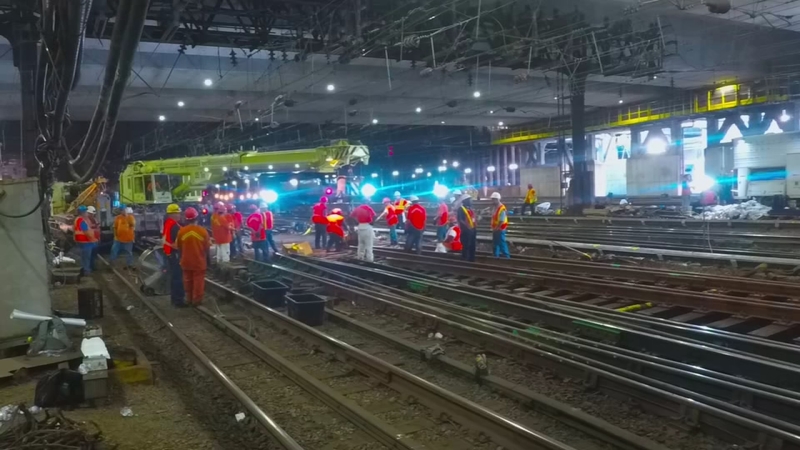 NEW YORK (WABC) -- The Penn Station repairs that many feared would lead to a "summer of hell" are complete, and regular service will resume on Tuesday, September 5.

Amtrak officials made the announcement Thursday, which came as welcome news to tens of thousands of commuters who rely on New Jersey Transit, the Long Island Rail Road and Amtrak.

The repairs began earlier this summer, raising concerns the project would cause massive disruptions and delays. But the work went off without significant problems.

"We've completed the accelerated infrastructure renewal program at Penn Station on time, on schedule, and most importantly, with no major safety incidents," Amtrak COO Scot Naparstek said. "Sincerest appreciation to our customers and passengers who exhibited amazing patience, flexibility and support as we worked around the clock to complete the work."

It focused on "A Interlocking," the critical sorting mechanism routing incoming and outgoing trains that enter and exit Penn Station from the Hudson River tunnel and the LIRR's West Side Yard to the various station tracks and platforms. It included total track and switch replacement and is expected to improve the reliability of train service through the area in Penn Station.

The resumption of regular schedules includes all previously announced modified routes at New York Penn station, as well as Empire Service trains, which will be returning to Penn Station for all arrivals and departures.

Additional work will last through approximately June 2018, with most of it taking place on weekends to lessen the impact to customers.

The LIRR and New Jersey Transit previously detailed their plans to resume normal service on September 5.

The MTA says discounted fares for traveling to alternative stations will end effective Friday, September 1, and temporary bus and ferry service put in place as alternative travel options for LIRR ticket holders will no longer operate after September 1.

But even despite reduced rush hour service, the on-time performance of the LIRR improved to 93.1 percent, the best month of the year.

"Let me be clear, the Long Island Rail Road's level of performance and customer service provided this summer has become and will be the new normal," MTA chairman Joe Lhota said.

NJ Transit officials said Morris and Essex Lines Midtown Direct trains will resume service to and from Penn Station and will no longer be diverted to Hoboken, while North Jersey Coast Line trains also will resume operating into Hoboken Terminal.

"I want to thank our customers for their patience and flexibility during the summer months," executive director Steven Santoro said. "While many had to adjust their personal schedules, we tried to provide them with enough options and support to make the transition as smooth as possible. We also monitored travel patterns throughout the summer and made service adjustments as needed."