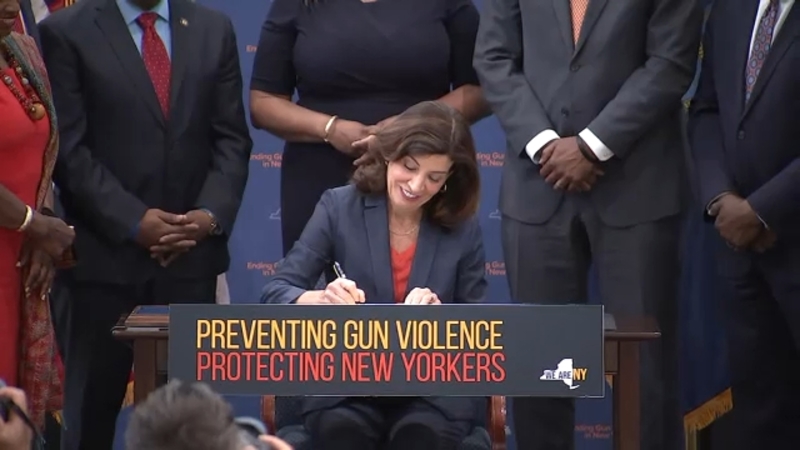 NEW YORK (WABC) -- New York Governor Kathy Hochul on Monday signed gun reform bills passed by Democratic lawmakers last week banning anyone under age 21 from buying or possessing a semi-automatic rifle, along with a series of other changes.

"This is a moral moment for the people of New York but also the rest of the nation," Hochul said. "Follow what we did here in New York, and we'll finally start to be at the beginning of the end of all this gun violence and the massacres that are occurring every day in our country."

All of the major bills passed in the wake of recent mass shootings, including the one at Robb Elementary School shooting in Texas that left 21, including 19 children, dead.

The series of changes include criminalizing the threat of attacks, revising the state's "red flag" law, banning the sale of body armor, requiring licenses for the purchase of assault rifles, and raising the minimum age to 21 to buy an assault rifle.

"We are microstamping bullets so law enforcement can have an easier time catching criminals, and we are losing loopholes so that firearms that are being so cleverly manufactured and alerted cannot evade our laws any more," Hochul said. "There's more to do."

The "red flag" law allows courts to temporarily take away guns from people who might be a threat to themselves or others.

"In New York, we are taking bold, strong action. We're tightening red flag laws to keep guns away from dangerous people," Hochul said at a press conference in the Bronx.

The regulations largely impact areas outside New York City, which already requires permits to possess, carry and purchase any type of firearm and prohibits most applicants under 21.

Elsewhere in New York, people as young as 16 can possess long guns like rifles and shotguns without a license.

New York now joins a handful of states -- including Florida, Hawaii, Illinois, Vermont, and Washington -- that require buyers to be at least 21 instead of 18 to purchase some types of long guns. Similar legislation has been proposed in Utah.

"Today is the start, and it's not the end," Hochul said. "Thoughts and prayers won't fix this, but taking strong action will. We will do that in the name of the lives that have been lost, for the parents who will no longer see their children stepping off the school bus."

California's attempt to raise the legal buying age for semiautomatic weapons has been challenged in court.

On May 11, a U.S. Appeals court panel ruled 2-1 that the state's ban on the sale of semiautomatic weapons to adults under 21 is unconstitutional. The two judges who ruled in the majority were part of Republican President Donald Trump's wave of conservative-approved nominees that reshaped the famously liberal court.

The National Rifle Association is also challenging Florida's ban on the sale of rifles and other firearms to adults under age 21, which was passed in the wake of a 2018 shooting that killed 17 students and staff at a high school in Parkland.

Another bill set to pass in New York would require new guns to be equipped with microstamping technology, which would allow law enforcement investigators to more easily link weapons to fired bullets.

The state is also expected to pass legislation that would restrict the purchase of body armor and expand the list of people who can apply for an extreme risk protection order, a court order that can temporarily prohibit someone from purchasing or possessing a firearm if they are believed to be a danger to themselves or others.

(Information from the Associated Press was used in this report.)