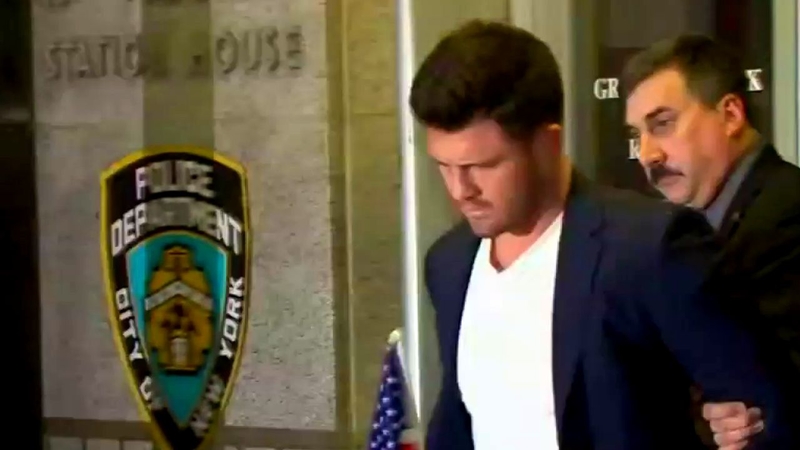 NEW YORK (WABC) -- New details are emerging about the two men charged in connection with the murder of a Connecticut man who was killed after a night of partying in New York City over the weekend.

The NYPD arrested 25-year-old James Rackover and 28-year-old Lawrence Dilione Thursday, charging them with concealment of a human corpse and tampering with physical evidence in connection with the murder of Joseph "Joey" Comunale. Dilione is also charged with hindering prosecution.

Investigators said the two were involved in the killing of 26-year-old Comunale, whose body was found two days after he was reported missing with 15 stab wounds to the chest in a wooded area down the Jersey Shore Wednesday.

Here's what we know about each suspect.

Eyewitness News obtained court records for Rackover showing a history of eight arrests in Florida. When he was there, he went by a different last name, Beaudoin, but changed it to James Rackover at some point after he moved.

Here are the details of his arrests:

And here are his mugshot from those arrests:

Rackover moved from Florida to New York City, with the help of famed jewelry designer Jeffrey Rackover. They met 3 1/2 years ago in Florida.

Jeffrey Rackover's spokeman, Bo Dietl, said the two developed a relationship and that Jeffrey got James a job and an apartment in New York City - all in an effort to get him on the right track. The two are not blood relatives, but James asked if he could use Jeffrey's last name.

"(Jeffrey is) devastated of what occurred, if in fact, that James was involved with this, Jimmy," Dietl said. "(Jeffrey) can't believe it. He cannot talk. He breaks down and cries. All he says is, 'why I did something so good and something so good to turn out so bad.'"

Watch as NYPD detectives walk murder suspect James Rackover from the precinct to a police vehicle in Manhattan.

Suspect Lawrence Dilione is from Oceanport in Monmouth County, New Jersey, but has since moved to Jersey City.

Police said the place where Comunale's body was found in a shallow grave was less than a mile from where Dilione used to live.

Dilione's reported place of business, Shore Point Roofing, is less than 3 miles away. It appeared shuttered when Eyewitness News stopped by Thursday.