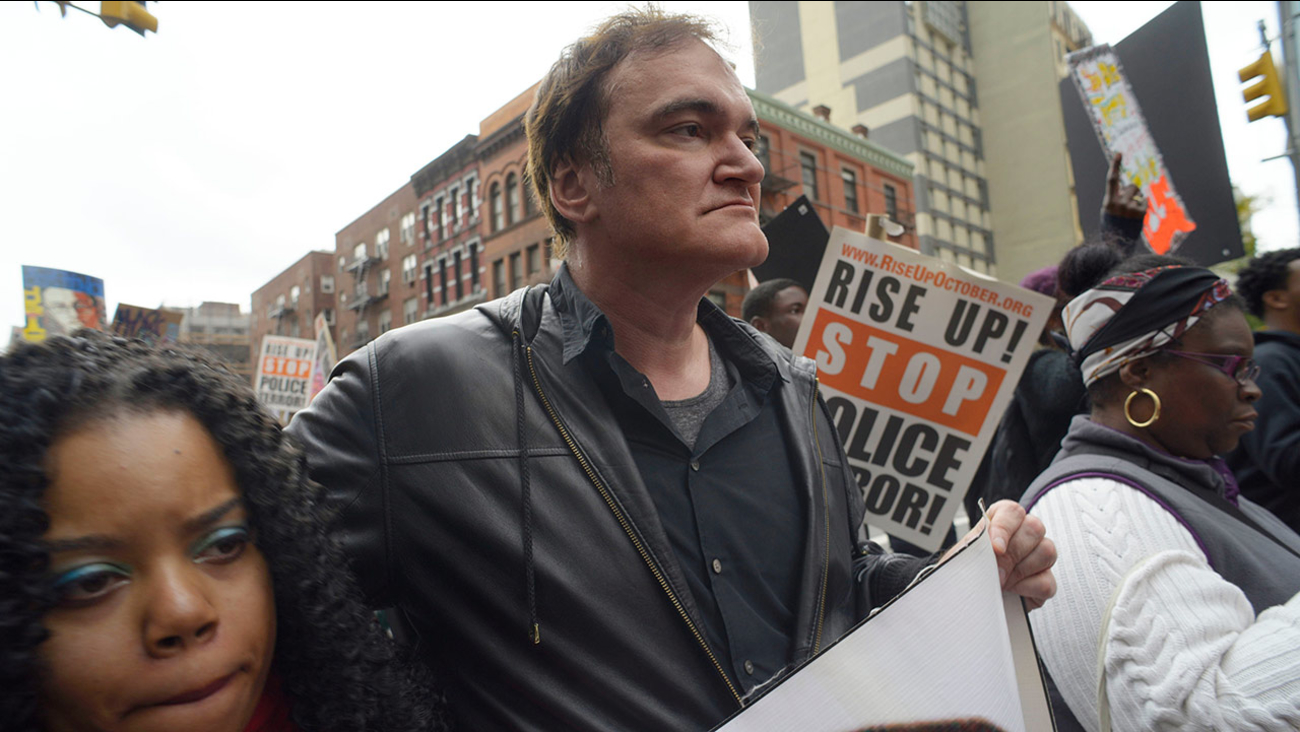 "I'm a human being with a conscience," said Tarantino, who flew in from California for the event. "And if you believe there's murder going on then you need to rise up and stand up against it. I'm here to say I'm on the side of the murdered."

The group gathered Saturday in Manhattan's Greenwich Village neighborhood at Washington Square Park before marching about 2 miles along Sixth Avenue. The protesters walked past lines of police officers who had cordoned off a lane of traffic for them. As they moved, those with megaphones shouted stories of the slain as others waved signs with photos of the dead, mostly young black men, and the dates and places of their deaths.

"It's no surprise that someone who makes a living glorifying crime and violence is a cop-hater, too," he said in a statement. "The police officers that Quentin Tarantino calls "murderers" aren't living in one of his depraved big screen fantasies -- they're risking and sometimes sacrificing their lives to protect communities from real crime and mayhem ... It's time for a boycott of Quentin Tarantino's films."

The event was the last of three demonstrations the group RiseUpOctober organized in New York this week. Speakers at the protest said they want to bring justice for people killed by police.

Temako Williams walked arm in arm with academic and activist Cornel West, one of the organizers. Her son, La-Reko Williams, was killed by police in 2011 in Charlotte, North Carolina. A federal jury ruled that a Charlotte-Mecklenburg police officer, who did not face criminal charges, had used excessive force, and it awarded her $500,000.

But, she said, the money is no substitute for justice.

While police were present all along the protest route, the day was peaceful. No arrests were reported.

The protest came at a time of heightened awareness nationwide of the oft-contentious relationship between police officers and the people they serve. New York's mayor and police commissioner have said they're serious about enacting smart reforms to build trust between police and communities.

But the protest also was days after a New York police officer, Randolph Holder, was shot to death while chasing a bicycle thief. A suspect has been charged with murder and robbery in the case.

The Rev. Al Sharpton dedicated his weekly radio broadcast and rally at his National Action Network headquarters to Holder. Sharpton and others went to the Brooklyn neighborhood where Holder served to lay a wreath and pray for him and his family.

Activist Carl Dix, who helped found RiseUpOctober with West, said that while he sympathized with Holder's family the officer's death did not affect the need to hold Saturday's rally as scheduled.

"That's not what this is about," Dix said. "This is about all the people who are murdered by the police."