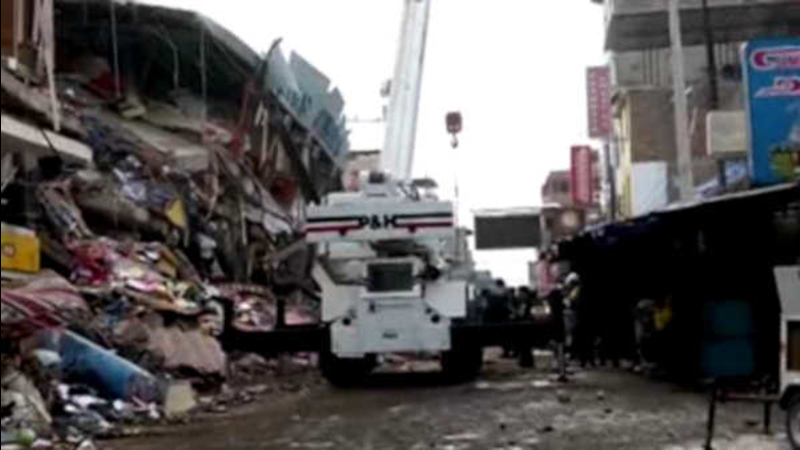 Queens residents worried about loved ones in Ecuador following earthquake

WOODSIDE, Queens (WABC) -- With more than a hundred thousand Ecuadorians living in the New York Area, Queens has the largest Ecuadorian community of any county in the United States. Even though a devastating earthquake struck almost three thousand miles away, its impact is being felt close by.

With two young daughters, and her sisters and family in Ecuador, it was a sleepless night or Erika Cornejo. She was unable to reach her loved ones when the massive earthquake struck her home country on Saturday. Cornejo says she was worried, depressed, and most of all - desperate.

Cornejo says it was the fear that kept her up. Power was knocked out for several hours, but by 2 a.m., she got word that her family is safe. They live just forty minutes from the epicenter.

A 7.8 magnitude earthquake struck northwest of the coast of Ecuador.

The magnitude-7.8 quake, the strongest to hit Ecuador since 1979, was centered on Ecuador's sparsely populated fishing ports and tourist beaches, 105 miles (170 kilometers) northwest of Quito, the capital.

Cornejo says she feels 'hopeless' for not being in Ecuador to help her family.

Cornejo is one of more than a hundred thousand Ecuadorians living in Queens, praying for the best.

Across the street from the Ecuadorian Consulate, at the tropical restaurant on Roosevelt Avenue, the local Ecuadorian newspaper is in the entryway, focused on the devastation. As of Sunday, the death toll is at more than 200, with more than 1,500 injured.

Impact of devastating earthquake in Ecuador felt in Woodside. 101K Ecuadorians in Queens, most of any county in US. pic.twitter.com/WYrnVVR3IV

The earthquake was the strongest to hit Ecuador in decades, flattening buildings, and buckling highways. Rescuers are now struggling to reach survivors trapped in the rubble.

Cornejo's husband is saddened to see the devastation.

"I can only help with what I can. Whatever they ask for me, I'll do," said Manuel Piulle in Spanish.

Now, as far as what the public can do to help? The Ecuadorian Consulate says it will make an announcement on Monday.