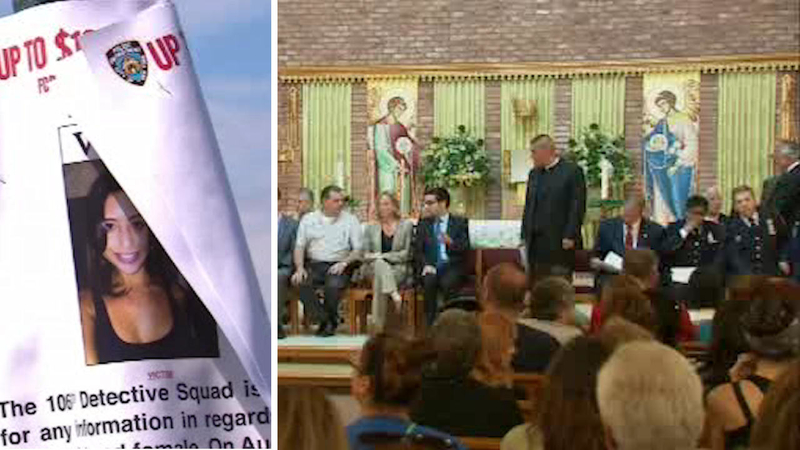 HOWARD BEACH, Queens (WABC) -- Community leaders and the NYPD held a public meeting in Queens Monday evening, discussing the investigation into the murder and sexual assault of a jogger nearly one week ago.

It was standing room only at Saint Helen's Catholic Church in Howard Beach Monday night.

A community meeting was held to get answers about the murder investigation, and to come up with solutions on to how to make the area safer following the murder and sexual assault of 30-year-old Karina Vetrano.

"We definitely need the cameras and the lights. We also need to have I plan in place that secures the park like every other National Park is secured," a resident said.

Many asked for the weeds to be cut down or eradicated altogether at Spring Creek Park.

Federal Parks Department officials saying they're looking into it but it is a costly project.

"To contract that out for a one-time mowing is over a half a million dollars. We're looking into that. We're not taking any solutions off the table," an official said.


They are also trying to develop a long-term $69 million dollar project to address the problem.

Police were careful about releasing information.

So far, there is no suspect or person of interest in the case.

Also, the evidence is pointing to one attacker, but that could change.

"I am not going into specifics into what was recovered at the scene. The individual or individuals that did this horrific act could be watching me speak right now. I am not letting them know what I have," the NYPD said.

Karina's aunt was in the crowd and was there to give a message to the community.

"On behalf of my sister and brother-in-law we just thank the community and police force from all their support in their terrible grief," said Ann, the victim's aunt.

At a news conference outside the family's home Sunday, the victim's mother Cathy delivered a strong message directed towards the killer.

A $10,000 reward was being offered for information leading to an arrest.

Karina Vetrano worked for a caterer and as a speech pathologist.