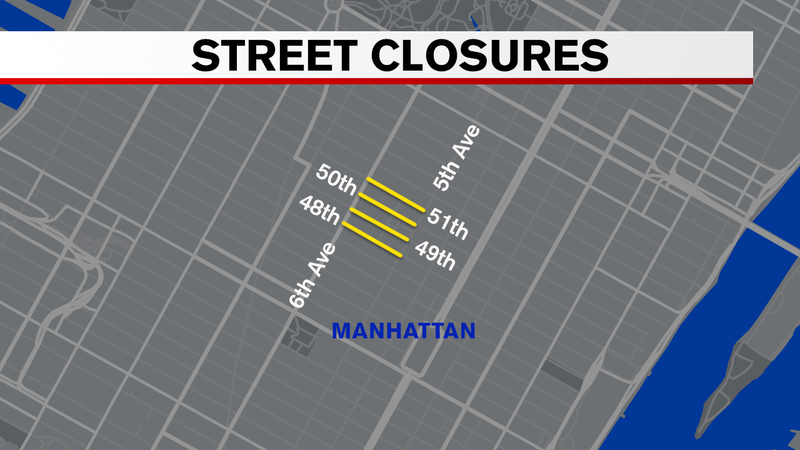 MIDTOWN, Manhattan (WABC) -- One of the most anticipated holiday events in New York City takes place Wednesday, as the Rockefeller Plaza Christmas Tree is lit. But for many who live and travel through the area, it is simply more Midtown gridlock with the added security near Trump Tower.

The holiday season is a magical time when most everyone is happy, where the rain doesn't matter and where even the temporary "no standing signs" look warm and inviting. But good tidings only get you so far.

And in Midtown, they've yielded to terrible traffic, blocked sidewalks and that once-a-year chance for hard-boiled New Yorkers to feed their inner Grinch.

"There are times when you feel like the city belongs more to tourists than to the people who live and work here," one resident said.

For the tree lighting, there are heavy security measures and street closures that will make the area one to avoid for drivers. Closures began at approximately 3 p.m. on 48th, 49th, 50th, and 51st streets between Avenue of the Americas and Fifth Avenue, until the end of the event around 11 p.m.

Police are urging spectators to use mass transit and to leave backpacks, large bags and umbrellas at home.

It's a similar scene just a few blocks up the street around Trump Tower, where the president elect is spending his transition in his three-story penthouse.

Passersby need to be searched just to walk down the street, and if the impact on traffic was a problem two weeks ago, just wait the holiday season springs into full gear.

"You have to add a lot of extra time to your commute," Greenpoint resident Brandy Russell said. "You just have to take into consideration that you're not getting anywhere when you thought you would."

Sanitation trucks are taking up positions as bomb barriers, but at least there is some holiday cheer.

"We came in, we ate, we're looking at the windows," Bellmore resident Gladiz Digangi said. "We're having a marvelous time."