The Democratic primary for NYC mayor was thrown into a state of confusion Tuesday after the initial release was pulled back.
WABC 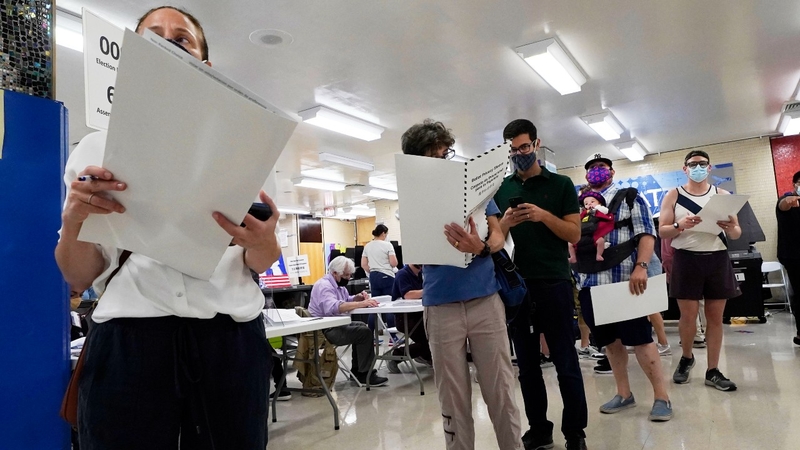 NEW YORK (WABC) -- New ranked choice voting results released by the Board of Elections on Wednesday still show that Eric Adams has a slight lead over Kathryn Garcia in the Democratic primary for mayor.

The BOE has re-run the ranked choice voting data and in nine rounds, not 11, Adams remains 2.2% ahead of Garcia. Even in the revised tabulations, Maya Wiley was eliminated.

There are still 124,574 democratic primary absentee ballots to be counted and the race is too close to call.

After the revised results, Adams said he is "leading this race by a significant margin."

"Our campaign was the first choice of voters on Election Day and is leading this race by a significant margin because we put together a five-borough working class coalition of New Yorkers to make our city a safer, fairer, more affordable place. There are still absentee ballots to be counted that we believe favor Eric--and we are confident we will be the final choice of New Yorkers when every vote is tallied."

Garcia said "we are taking nothing for granted and encourage everyone to patiently wait for over 124,000 absentee ballots to be counted and included in the ranked choice voting tabulation."

"While we remain confident in our path to victory, we are taking nothing for granted and encourage everyone to patiently wait for over 124,000 absentee ballots to be counted and included in the ranked choice voting tabulation. Every vote is important and deserves to be counted. New Yorkers overwhelmingly voted to enact ranked choice voting and participated in it by ranking multiple candidates in our City's first ranked-choice election. Every candidate should respect the democratic process and be committed to supporting whomever the voters have selected to be the Democratic nominee for Mayor. We look forward to the final tabulation in this historic election."

After the "discrepancy" over the initial results released Tuesday, the BOE released the following statement with the updated results:

"Yesterday's ranked choice voting reporting error was unacceptable and we apologize to the voters and to the campaigns for the confusion. Let us be clear: RCV was not the problem, rather a human error that could have been avoided. We have implemented another layer of review and quality control before publishing information going forward. We can say with certainty that the election night vote counts were and are accurate and the RCV data put out today is correct as well. As we continue to count absentee ballots and run further RCV tabulations, we will do so with a heightened sense that we must regain the trust of New Yorkers. We will continue to hold ourselves accountable and apologize to New York City voters for any confusion."

Officials realized the results had been corrupted by test data never cleared from a computer system.

"Yet again, the fundamental structural flaws of the Board of Elections are on display," Mayor de Blasio said. "There must be an immediate, complete recanvass of the BOE's vote count and a clear explanation of what went wrong. The record number of voters who turned out this election deserve nothing less."

The revelation added disarray to the city's first mayoral election to use ranked-choice voting and a seed of uncertainty to the outcome.

"Today's mistake by the Board of Elections was unfortunate. It is critical that New Yorkers are confident in their electoral system, especially as we rank votes in a citywide election for the first time. We appreciate the Board's transparency and acknowledgment of their error. We look forward to the release of an accurate, updated simulation, and the timely conclusion of this critical process."

"New Yorkers want free and fair elections, which is why we overwhelmingly voted to enact ranked choice voting. The BOE's release of incorrect ranked choice votes is deeply troubling and requires a much more transparent and complete explanation. Every ranked choice and absentee vote must be counted accurately so that all New Yorkers have faith in our democracy and our government. I am confident that every candidate will accept the final results and support whomever the voters have elected."

This week's tabulation in the NYC mayoral primary will not be final, because it does not include more than 124,000 absentee ballots. However, it is supposed to show a complete tally of in-person voting.

As many expected, Garcia picked up enough 2s and 3s to jump Wiley and eliminate her in the final round while closing the gap on Adams.

Dave Evans has more with Kathryn Garcia after the initial ranked choice voting results were released.

Meanwhile, Wiley released a statement maintaining that "this election is still wide open."

"With more than 120,000 absentee ballots left to count - in addition to provisional ballots and potential recanvassing of results - this election is still wide open. That's why following yesterday's embarrassing debacle, the Board of Elections must count every vote in an open way so that New Yorkers can have confidence that their votes are being counted accurately. As John Lewis said, democracy is an act, and we owe it to every single New York City resident who acted and to all residents to protect our democracy. We have made tremendous strides in making it easier to vote. Now residents deserve to have full faith in how our elections are administered. New Yorkers expect and deserve a transparent process and that every single vote is accurately counted - our democracy will be the stronger for it."

The board is expected to do another round of analysis next week which will include the absentee ballots.

In the Republican mayoral primary, Guardian Angels founder Curtis Sliwa cruised to a decisive victory over Fernando Mateo, with over 70 percent of the vote.

Meanwhile, in the comptroller's race, Brad Lander is now 3.4% ahead of Corey Johnson, or 19,979 votes -- with the same number of absentee votes to be counted.