5 injured, including 2 firefighters, in 3-story building fire in Bronx 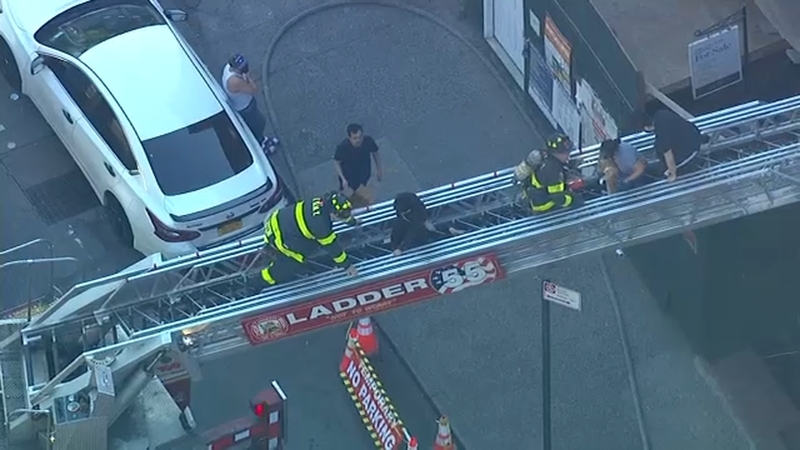 MOTT HAVEN, Bronx (WABC) -- Five people were injured in a fire in the Mott Haven section of the Bronx Wednesday.

NewsCopter 7 captured New York's bravest rescuing a family of three with their cat coming down the ladder from a three-story building on Willis Avenue just before 9 a.m.

The FDNY says three people were injured and two firefighters suffered minor injuries -- the injuries are not life threatening.

The only way out of their brownstone apartment was by tower ladder, as the mother, her two sons and the family cat came made their way to safety.

"Very scared," said Gabriela, who has been living at the apartment building for nearly 20 years. "Very scared for my kids. My son is small. He's 10 years old"

Firefighters say the fire broke out on the floor below her family's apartment, but the damage from smoke and water is extensive.

The family on the third floor had left for school moments before the fire started.

On the ground floor, there's a market selling goods from Africa. Friends of the owners were seen wiping down the plastic wrap covering garments.

"A lot of water come to the inside a lot of damage in there," friend Anienatta Sillah said. "She needs help."

The store's owner says the building has had electrical issues, with no electric at all during December.

And just this past week, a circuit started smoking and he notified the owner.

"I called her because I had smoke in here, and I turned off the switch," store owner Mousa Konath said. "And Saturday, the electric guy came and checked everything and said it's okay."

The owner of the building says Con Edison had just done work.

"Two days they were here, all the wires are old and burned out," landlord Dolly Mendoza said.

The fire resulted in so much damage, but all are grateful that to have survived.

"My kids are fine and so am I, that's the most important thing," Gabriela said.

Neighbors say they heard some sort of explosion that may have led to the fire.
The FDNY doesn't believe it to be a case of arson as the cause of the fire is under investigation.
MORE NEWS: Video shows NYPD transit officers rescue man who collapsed onto subway tracks
EMBED More News Videos