Election 2020: 18 arrests made as tensions escalate with police for 2nd night in NYC 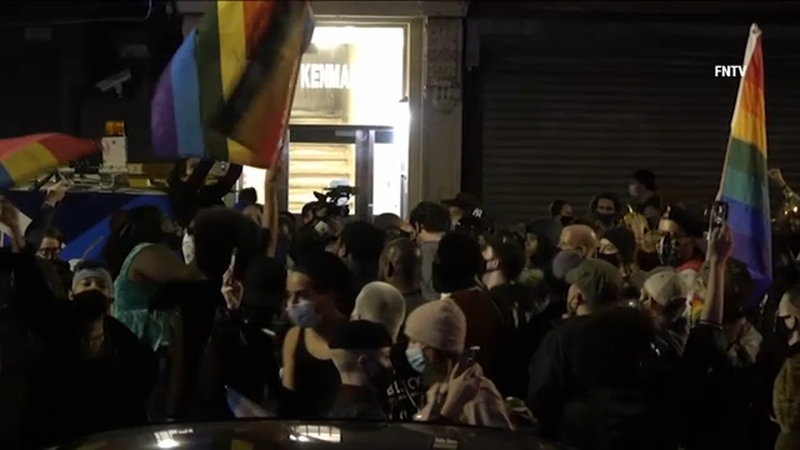 NEW YORK (WABC) -- Tension grew across Lower Manhattan for the second night in a row, after what started as peaceful rallies and marches wound up with smaller crowds and pandemonium.

A rally was held outside of the Stonewall Inn earlier Thursday, but after the crowd dispersed, authorities say some people came back and the situation escalated.

The weekly Stonewall Inn protest in support of trans people marched peacefully east through Greenwich Village to Broadway, but then it appeared a homeless man tried to hold a chain against the neck of a police officer.

As police tried to make the arrest, others tried to intervene leading to at least a dozen arrests.

Tonight, while performing their duties near Bond St & Broadway in Manhattan, an officer was pushed to the ground & had this chain pressed against his throat. The suspect was apprehended & will be charged with assault, criminal possession of a weapon & attempted strangulation. pic.twitter.com/QuWAosMAAP

Hundreds made the turn southbound and traffic on Broadway was stopped.

Everyone who was there got pushed back by police using their bicycles to shove the crowd away from the arrests.

Small protests also took place around the Lower East Side and the NYPD made six arrests on Lafayette and Broome Street.

After a different group started marching from Union Square, there was another confrontation.

Police recovered a knife from a person taken into custody at 12th Street and 4th Avenue.

The NYPD tweeted that "Bringing weapons like this to protests is unacceptable."

Another issue facing officers trying to control the protesters is that if they are given summonses and not held, those released would rejoin the active protests.

"If protests were still active during the time they were released, they were right back out there, you know, to participate, those are some of the challenges we are met with," said Chief Juanita Holmes.
Police insist the people causing trouble are just a fraction of the demonstrators overall, but reflect a new trend of uncivil disobedience. They say they are fueled on social media in a globalization of tactics training a new breed of protesters who seem, cops say, to want the fight.

The 18 arrests come after a busy night for police Wednesday into Thursday.

On Wednesday, a group marched down 5th Avenue in support of Count Every Vote. After that rally dispersed, there were reports of unrest, garbage set on fire and clashing with police.

At least 20 arrests were made Wednesday night as individuals set fires and clashed with police in NYC.

The NYPD also confiscated weapons on Wednesday night, including M80 fireworks, a Taser that said "police" on it, a hammer as well as knives.

These weapons, confiscated at protests tonight, put others at risk. Bringing weapons to peaceful protests cannot and will not be tolerated. We are currently working to de-escalate the situation. Anyone caught with a weapon will be arrested. pic.twitter.com/GiCDv74ncT

"We certainly have seen some of that earlier in the year. Last night we saw relatively few people out. Certainly nowhere near what was projected that was raising concern. I think we can safely say the vast vast majority of people simply want to see the election results counted fairly, they want to know the result as soon as possible and then we are in a position to move forward," he said. "I do not see a particular problem like you described. Clearly, what most overwhelming number of New Yorkers want is just a peaceful approach to this election dynamic, and the ability to move forward and move on."

RELATED | NYC businesses board up amid fears of civil unrest

As uncertainty around the election result continues, police anticipate so might the protests.

RELATED | Who will win the 2020 election? Here are Joe Biden and Donald Trump's paths to victory
EMBED More News Videos

Paths to victory: How President Donald Trump or Democrat Joe Biden could win the presidential election as of Wednesday morning.