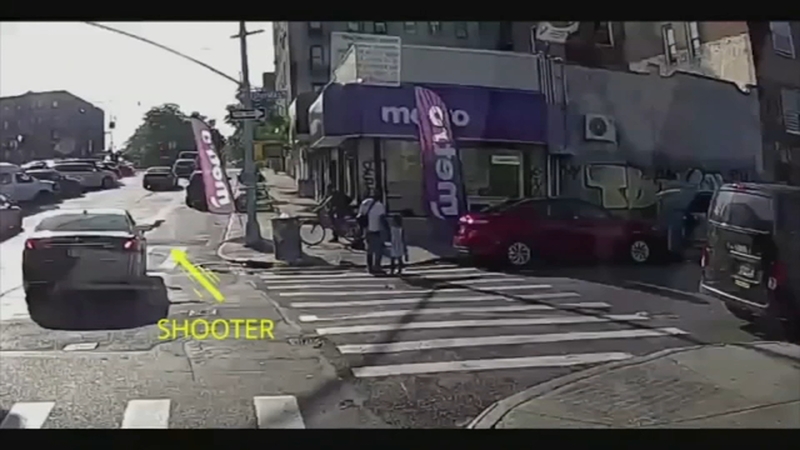 Gunfire echoes through city as violence surges in NYC

NEW YORK CITY (WABC) -- It was a weekend plagued by gun violence across New York City as the surge in shootings continues, with 11 people killed in two days and 30 shootings with 10 homicides on Sunday alone.

Police say 48 people were victimized in those 30 shootings, including a terrifying caught-on-camera murder in which a man walking with his 6-year-old daughter was gunned down on the street in broad daylight.
EMBED More News Videos

It was a weekend plagued by gun violence across New York City as the surge in shootings continues, with 11 people killed in two days and 30 shootings with 10 homicides on Sunday alone.

Anthony Robinson, 29, was walking with his daughter on East 170th Street in the Bronx just before 6 p.m. when a car pulled up and a gunman opened fire out the window. The video shows the girl running for cover as Robinson falls to the ground.
EMBED More News Videos

Authorities say Robinson, who reportedly has many prior arrests, was pronounced dead at BronxCare Health System. The child was not physically harmed.

Mayor Bill de Blasio said Monday that he believes the most central issue for the violence is that the New York City court system has not been functioning due as normal due to the COVID-19 pandemic, though police also placed the blame on gang violence, bail reform, district attorneys, and Rikers releases due to the coronavirus.

At their monthly crime stats briefing, police officials said there has been a high spike in gang-related violence, and that nearly all the murder victims are minorities.

They said half of the murders have occurred in just 10 police precincts that are "overrun by gangs."

"There is a lot of gang activity, a lot of drug activity," Police Commissioner Dermot Shea told NY1 Monday morning. "It's bad people with guns, and it doesn't get any simpler than that. People settling scores, spraying a crowd."
EMBED More News Videos

Darla Miles has more on the vicious spike in shootings in New York City.

He also said a new law banning chokeholds is worded so poorly that officers are afraid of making arrests.

"They are afraid if they're making an arrest, that if their knee goes on the back of someone that they're fighting their life, for that they can be prosecuted," he said. "That's a problem."

Shea said he would speak to the city's five district attorneys Monday about the lack of prosecutions.

"We have to get the criminal justice system moving," Shea said.

The NYPD reported a significant spike in gun violence in murder in June compared to the same month a year earlier. There was a 130% increase in shootings (205 vs. 89) and nine more murders (39 vs. 30) than in June of last year, and the number of shootings rose in every borough.

Police brass pointed to a round of deep budget cuts that have led to a class of 1,163 recruits being canceled and an increase in retirements, as well the NYPD's facilitation of peaceful protests that they say continues to utilize department resources.

They also say criminals released due to bail reform have been rearrested for approximately 750 additional major felonies through June 26, compared with the population of those released in the same period a year ago.