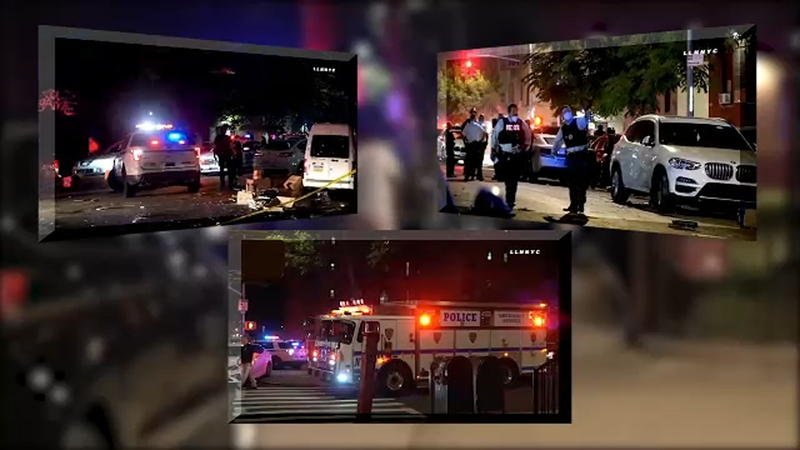 At least 9 killed, dozens wounded in violent Sunday in NYC

NEW YORK CITY (WABC) -- Police are investigating a spree of violence that left several people dead and dozens injured across NYC on Sunday.

Between midnight and 9 a.m. Sunday, there were 23 shootings with 41 victims.

The violence continued throughout the city over the course of the day and into the evening.

- A 45-year-old man was found with a gunshot wound to the head on 197 Gordon Street on Staten Island Sunday night. Police say the victim was pronounced dead at the scene. An investigation is ongoing.

- A 29-year-old man and a 23-year-old man were both killed in front of 306 East 171 Street in the Claremont section of the Bronx. A 22-year-old was also shot in the leg. There are no arrests and the investigation is ongoing.

-A 23-year-old man was found dead in Mount Sinai Saint Luke's Hospital. Police say he had been shot in the back and was taken to the hospital where he was pronounced dead.

-A 40-year-old man was fatally shot in the chest on Sutter Avenue in Brooklyn.

-A 20-year-old man was shot in the chest on Atkins Avenue in East New York. He was taken to Brookdale Hospital where he was pronounced dead.

- A 29-year-old man was shot in the chest on East 170th Street in the Bronx Sunday evening. He was taken to the hospital where he was pronounced dead.

- A 21-year-old was shot in the chest on Christopher Avenue in Brownsville, Brooklyn. He was taken to the hospital where he was pronounced dead. No arrests have been made.

Also early Sunday morning, a bullet struck the windshield of a marked NYPD vehicle with two officers inside in the Mott Haven section of the Bronx.

The male officer, who has been in the force since January 2018, suffered a cut above his eye and was transported to an area hospital.

The female officer, who has been in the force since October 2019, was transported to an area hospital for tinnitus.

NYPD Chief of Department Terence Monahan took to Twitter about the incident.

Today, we are extremely fortunate to not be mourning the loss of hero cops in the Bronx — who could’ve been killed last night when their police car was struck by gunfire. Despite these dangers, officers are out there on behalf of every NYer. They’re all owed a debt of gratitude. pic.twitter.com/hH94cODVHD

It's unclear if the officers were targeted. No arrests have been made thus far.

OTHER SHOOTINGS AND VIOLENCE

In Harlem, six people were shot Sunday morning. Police say all six were treated for their injuries at an area hospital.

Meanwhile, five people were shot in the Inwood section of Manhattan Sunday morning. Authorities say four victims are in stable condition and one is in critical.

In Queens, one suspect is under arrest while another is on the loose after multiple people were stabbed on a southbound 7 Train at Roosevelt Avenue and 52nd Street Subway station.

One man was stabbed in the stomach and injuries of the second victim is unknown at this time, according to police. Both were transported to an area hospital.

And a dispute led to a shooting in which police opened fire on a suspect in Long Island City.

Later Sunday evening, a 15-year-old became one of the latest gunshot victims in the city. He was shot in the chest and taken to Harlem Hospital for treatment.

President Trump commented on the surge in violence on Twitter and said the federal government is ready and willing to help:

Chicago and New York City crime numbers are way up. 67 people shot in Chicago, 13 killed. Shootings up significantly in NYC where people are demanding that @NYGovCuomo & @NYCMayor act now. Federal Government ready, willing and able to help, if asked!