Funeral held for NYPD Officer Anastasios Tsakos, killed in the line of duty 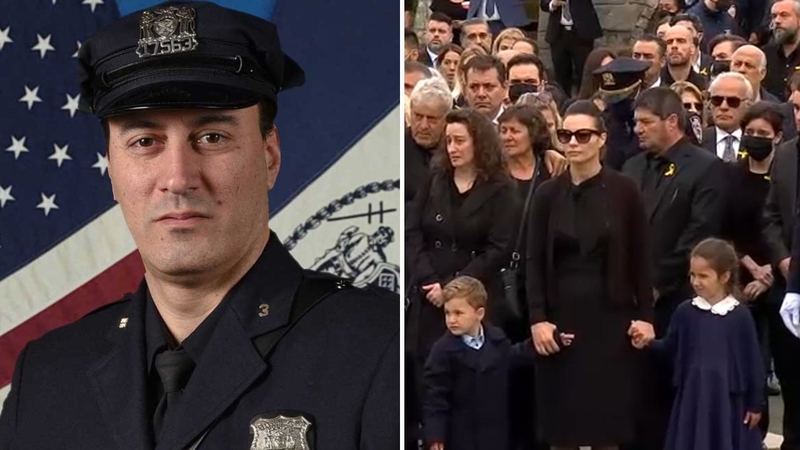 NYPD officer killed in line of duty laid to rest

GREENLAWN, Suffolk County (WABC) -- Family, friends and brothers and sisters in blue turned out Tuesday to bid a final farewell to an NYPD officer who was killed in the line of duty.

Funeral services were held in Greenlawn for Officer Anastasios Tsakos, who was fatally struck by alleged drunk driver on the Long Island Expressway in Queens last week.

Mourners sang and prayed over the officer's open casket inside St. Paraskevi Greek Orthodox Church as the service got underway, with Mayor Bill de Blasio and NYPD Commissioner Dermot Shea in attendance.

In a final tribute, thousands of police officers from around the country stood shoulder to shoulder to pay their respects to #NYPD @NYPDHighway Detective Anastasios Tsakos, who was tragically killed in the line of duty last week#RestInPeace #NeverForget pic.twitter.com/miJ9jYrfPO

Outside, police officers and the community gathered in a show of support for Tsakos, known to friends as "Tasso," his wife Irene, and their two small children.

"I wish we could grow old together," Irene Tsakos said. "That was the plan. But he was taken from us too soon."

The steady thunder of at least 250 motorcycles roared up Pulaski Road as highway police from all over paid tribute to one of their own.

This was the second day of services honoring the fallen officer, following a wake on Monday that lasted for several hours and drew thousands of mourners.

Just 180 people were permitted to attend the funeral inside in the church due to COVID restrictions.
EMBED More News Videos

Kristin Thorne reports on the funeral for the NYPD officer killed in the line of duty last week.

"It does not make sense how someone could live his life right in every way and be taken from us so horribly," de Blasio said. "But his heroism uplifts us."

The mayor cited the officer's heroic 14 years of service, telling his grieving family that his tragic death should not be in vain.

"We have a chance to finally do something different," he said. "To pass a law in Albany that will finally penalize those who drive drunk and hurt others and kill others, to finally create consequences where they have not existed."

Tsakos, who hadn't taken a sick day in 10 years and he had 200 arrests, was posthumously promoted to detective first grade.

"I would ask everyone who could hear my voice today, to take a moment to appreciate police officers like Anastasios," Shea said.

"This was a particularly horrific killing," retired Congressman Peter King said. "With all the attacks upon the police, the way cops are being attacked every day, I think it's really important for all people for that matter to show up and show their respect."

"We're just a small show of support for this terrible tragedy that happened," he said.

Tsakos was diverting cars off the highway after a previous fatal crash when he was struck by 32-yea-old Jessica Beauvais, who police say admitted to drinking wine, vodka and tequila before getting behind the wheel. She is now facing 13 charges.

But justice won't bring back this beloved officer, who was a husband and father first.

"It's hard," family friend Kelly Fokianos said at the wake on Monday. "They're trying to be as strong as they can, and I think they're just focused on being strong for the family."

The family moved to East Northport less than a year ago, and neighbors say Tsakos made a quick impression on them.

"He loved his wife, Irene, and his kids and of course his brother and his parents who came from Greece," said NYPD Lt. John Pappas. "The whole family's devastated. Anyone who ever knew him is devastated."