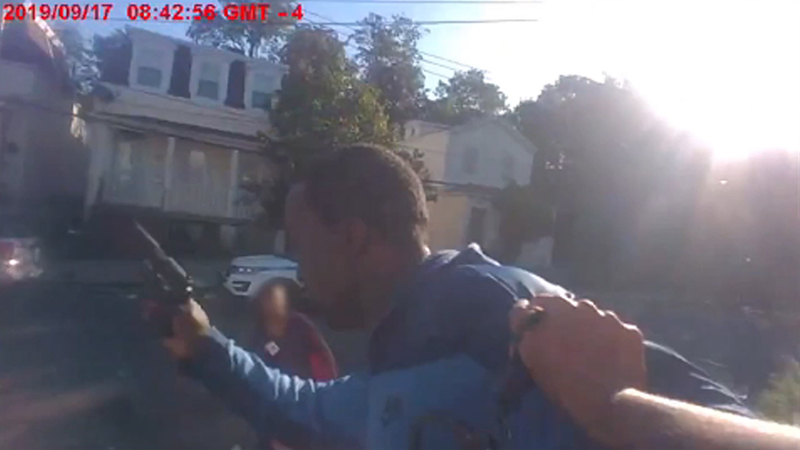 STATEN ISLAND, New York City (WABC) -- The NYPD has released body camera footage from a police-involved shooting on Staten Island in September, part of a larger effort to increase accountability and transparency.

Narrated by the NYPD Deputy Chief Kevin Maloney, the edited video includes camera footage, audio recordings and radio transmissions leading up to and during the incident.

Police say Edwards tried to run and was corralled by two officers, one of whom tried to use a stun gun that proved ineffective.

Authorities say Edwards then descended a staircase and pulled a gun from his jacket, firing at the officers.

One of them was struck in the hand, and at that point, an officer fatally shot Edwards.

Last month, the NYPD updated its body camera policy and agreed to release video of critical incidents within 30 days.

"What exactly is a critical incident?" New York City Public Advocate Jumanne Williams said. "Why can't the family see it? There are a lot of unanswered questions."

The NYPD estimated it would have to hire 800 new people to fulfill Williams' request. He's hopeful they'll reach a compromise.

"People are talking about policing and what it means to police in certain communities," he said. "We should lead that conversation in transparency...Frankly, there's a lot of concern about accountability and transparency in the department. I think everybody knows that."

The NYPD says it is committed to releasing footage of critical incidents captured by body-worn cameras within 30 days, with limited exceptions, while also balancing privacy concerns, protecting against compromising criminal investigations, and the need to comply with federal, state and local disclosure laws.

The department is promising to share similar videos for other police involved shooting incidents in the coming weeks and months.