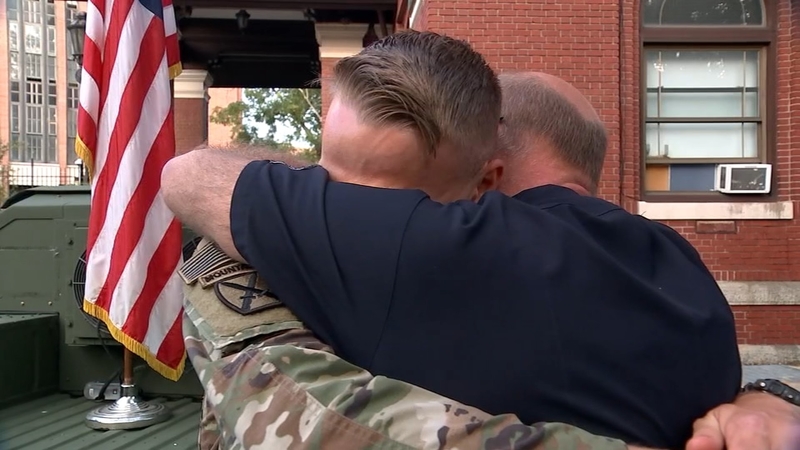 NEW YORK (WABC) -- There was a huge surprise this week for a veteran New York cop who was called back to his precinct to help greet a VIP visitor -- who turned out to be his very own son.

Deputy Inspector Thomas Alps had to call in his patrol sergeant on Wednesday.

Sgt. Harold Murphy was being called back to the NYPD precinct to be part of a detail to greet a special VIP. He thought Cardinal Dolan was coming, but instead, he was in for a surprise.

Murphy came back and joined the line of officers there to greet 'Cardinal Dolan.' It has been a long year for all police, but harder still for Sgt. Murphy. His son, Ryan, also a New York City police officer, has been in Afghanistan all year, serving as a sergeant with the U.S. Army.

Because of the time difference and his son's many responsibilities there, the two rarely even get to talk - and the elder Sgt. Murphy thought his son would be in Afghanistan for several more weeks.

It took a moment to register, and at first, his dad didn't know what to do when seeing his son, but a gentle nudge was all it took before they gave each other a big hug.

And while his son is a police officer, he says his dad never encouraged that life.

"He never raised me to do that job," he said.

"I'll be honest, I had tears in my eyes - it was great," said Deputy Inspector Alps.