INVESTIGATORS: Video of arrest during parade raises questions about NYPD's use of force 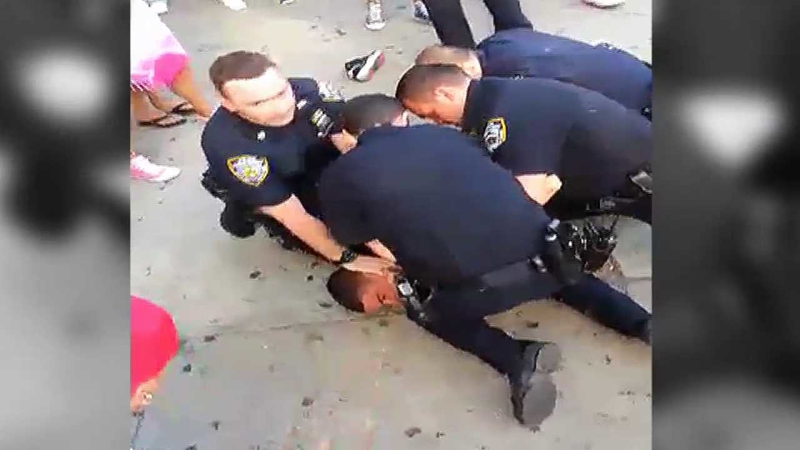 Video of arrest raises questions about NYPD's use of force

NEW YORK (WABC) -- Once again, cellphone video captured by an eyewitness to an arrest is raising questions about the NYPD's use of force.

Police officers are trained to de-escalate arrest tensions but video obtained by Eyewitness News shows an arrest that flies out of control even though the suspect appears to be cooperating.

"I put my hands up, they were searching me," said Caminero. "When he said give me your ID, my ID is in my pocket, so I went to give him my ID. I didn't even get my hands inside my pocket, and he just slammed me in the gate."

That's when a police sergeant rushes over and punches him in the face several times before Caminero is tackled to the ground by four officers. The sergeant and another officer continue punching him.

When asked if Caminero was resisting arrest, he said, "No, not at all."

He was struck with a baton at least 10 times before being cuffed.

Haberfeld said the officers did not use excessive force.

"People feel extremely violated, but in terms of police procedure they executed an arrest and they acted within the continuum of force," Haberfeld said.

"It doesn't appear, I believe, looking at the video that he's resisting in any way. He's lying on the ground and being beaten from all angles. I'm not sure what the professor would have wanted Mr. Caminero to do at that point," Kay said.

In fact, Caminero was never charged with resisting arrest and we learned just days ago that all drug charges against him have been dropped. Perhaps most revealing is that the NYPD told us the sergeant seen in the video punching Caminero has been disciplined, but they would not tell us how.

Meanwhile, weeks ago Caminero and his attorney filed a civil rights suit against the NYPD claiming false arrest and failure to train and properly supervise its police officers.

"There was no reason for this situation to escalate," Kay said. "They should have attempted to diffuse the situation rather than escalate it."