Palestinian community center in NJ bombarded with threats for 7 hours 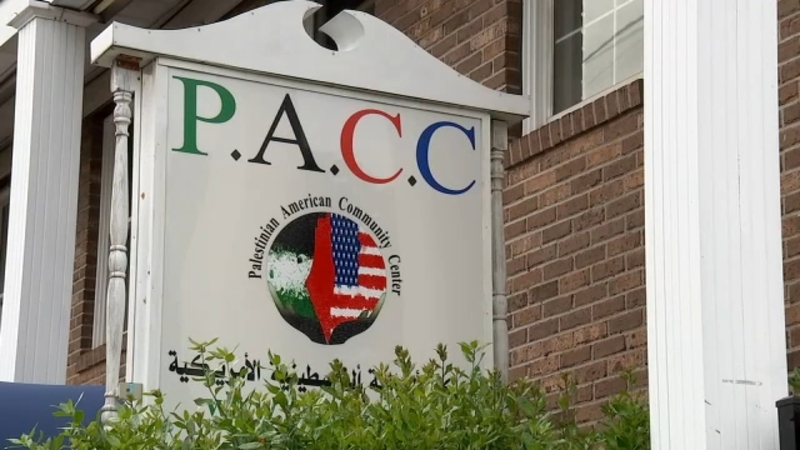 CLIFTON, New Jersey (WABC) -- A Palestinian community center in New Jersey is being bombarded with threats, including more than 30 disturbing phone calls over a seven-hour period Tuesday.

Now, officials at the Palestinian American Community Center (PACC) in Clifton want the person or persons responsible to be held accountable.

The calls started around 11 a.m. and continued to around 6 p.m., with the current Israeli-Palestinian conflicting seeming to fuel the perpetrator's tirades.

Police on Long Island are looking for the persons who vandalized a mosque, burning a sacred flag and spray painting pro-Trump graffiti on the marble base.

"And that was when he continued, he started getting more aggressive," PACC Community Engagement Coordinator Abire Sabbagh said. "He started saying, 'Is this the terrorist center?' 'Are you guys a terrorist organization?' 'You guys behead children,' 'You guys bomb people,' 'I should just come over there and bomb the whole building right now.'"

The community center is a place of outreach and help, a place to gather and celebrate. As a result of the calls, they are stepping up security.

"It's not easy, especially being someone who has been an activist for Palestine for a long time, being a woman, there's always extra fears that come," Sabbagh said. "It's not something to take lightly."

The New Jersey chapter of the Council on American-Islamic Relations (CAIR-NJ) is calling on the FBI to investigate the threats, which are being investigated as a hate crime.

"Our office has filed a complaint with the FBI and expects a formal investigation to follow immediately," CAIR-NJ Executive Director Selaedin Maksut said. "We urge the FBI and state law enforcement authorities to take domestic terrorism threats seriously and to ensure the safety of PACC's members."

Maksut said in that just being a Palestinian makes them a target.

"Not only is it a cultural center, where they gather and they express their identity as Palestinians...it's a place where they formulate their identity of who they are, and that's what's under attack, that their very existence as Palestinians is under attack," Maksut said. "And it's concerning to see that there are those that wish to bring an end to centers like this, that do so much work humanitarian effort relief effort community organizing and civic engagement...Right now we're seeing an uptick in Islamophobic and anti Arab sentiment, with the backdrop of what's going on in Palestine. So we're just calling on local officials to be vocal and condemn what's happening."