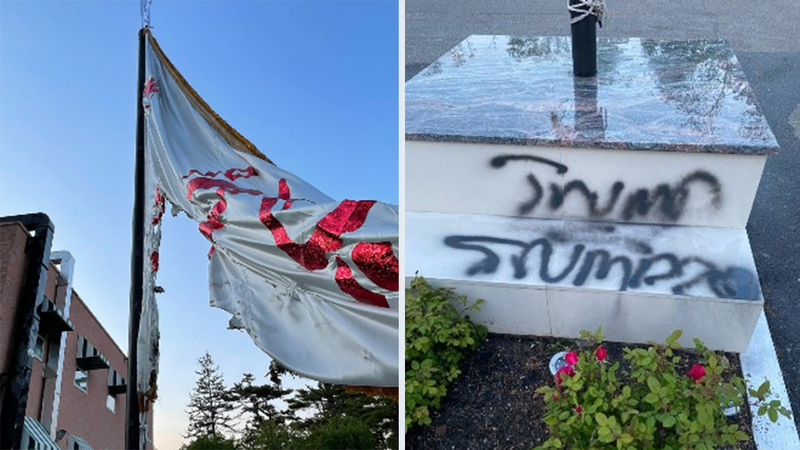 BRENTWOOD, Long Island (WABC) -- Police on Long Island are looking for the persons who vandalized a mosque, burning a sacred flag and spray painting pro-Trump graffiti on the marble base.

It happened around 2 a.m. Monday at the Islamic Center of Suffolk County on 3rd Street in Brentwood.

Suffolk County police say two people cut through a fence to enter the facility, set the religious flag on fire, and defaced the flag base.

"It looks like it was pre-meditated," acting Suffolk County Police Commissioner Stuart Cameron said. "Someone had to cut through the fence."

Police are scanning for any surveillance video and now offering a reward for information in the case.

"They also had to bring whatever was used to set the flag on fire," Cameron said. "So it was a very upsetting hate crime to us."

A Dobbs Ferry police officer was assisting a Con Edison crew when he was assaulted in a seemingly random attack Thursday afternoon.

The mosque is a fixture in Brentwood for the last 15 years, and police say there hasn't been an instance of mosque vandalism in the county since 2018.

"This required thought," mosque President Syed Naqvi said. "Nighttime, and they choose a place where they cannot be seen."

The political undertones are also troubling to those in the community who just don't understand why the mosque would be targeted.

"Hate, I guess," Naqvi said. "People who don't like other people. Ignorance, I'd say."

Police say the nature of the crime, particularly the burning of the flag, will clearly define it as a hate crime and increase the penalties. And many fear the perpetrators could return.

"We have a lot of glass windows doors and that," Naqvi said. "So if they come back, they could break anything they could damage, too."

The Jafria Association of North America condemned the vandalism, saying the defacement of any place of worship is deeply offensive and hurtful and the burning of the Alam (flag) and the accompanying message on the Shah-E-Najaf Mosque clearly constitute a hate crime.

The organization said it is not the first time the mosque has been targeted.

Islamophobic material was dropped around the grounds in August of 2016, and swastikas were drawn on the driveway in October of 2014.

In May of 2007, the mosque was broken into with swastikas and "White Power" written on the walls. A knife was also discovered.

Still, worshippers say they've barely had any problems in the past and were are stunned by the act of hate.

Those who live nearby were shocked.

"It was heartbreaking," Brentwood resident Demian Payne said. "Especially after COVID, the community pulling together, to have someone pull back from the community, it isn't a representation of Brentwood."

The Hate Crimes Unit and Arson Section detectives are investigating, and a $2,000 reward is being offered for information that leads to arrests.

Anyone with information can contact Suffolk County Crime Stoppers to submit an anonymous tip by calling 1-800-220-TIPS.