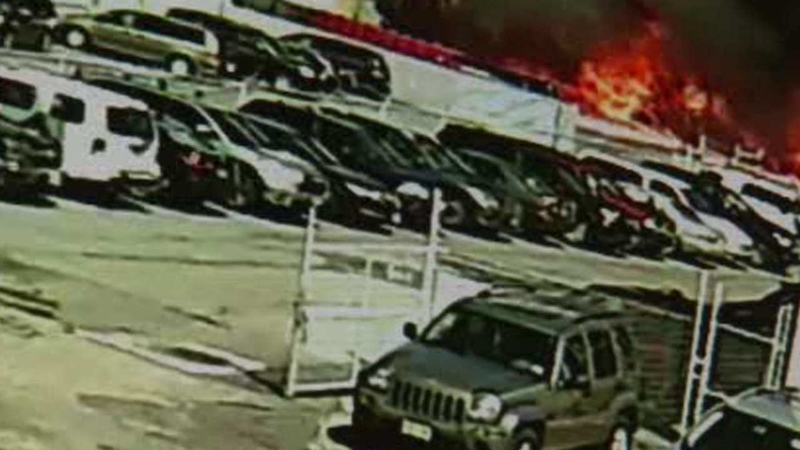 It happened just after 3:30 p.m. ET on Kero Road in Carlstadt, near Teterboro Airport -- a small airport located close to New York City.

Officials said the small, Learjet 35 jet came from Philadelphia and was just about to land at Teterboro. There was no indication in the radio communication with the tower that there was anything wrong -- the plane simply dove into the the industrial area about a 1/4 mile from the airport and burst into flames. Three buildings caught fire as a result.

Carlstadt spokesman Joe Orlando said two crew members on board -- believed to be the pilot and co-pilot -- were killed in the crash. No passengers were on board, and no people on the ground were injured. In a press conference, officials said the fact that no one on the ground was injured at that time of day was "quite remarkable."

The Medical Examiner is working to determine the identity of the victims.

A person who worked in one of the buildings hit by the plane said the crash happened about 30 minutes after one of the businesses closed, so no one was inside. However, there were people in the second building -- and they were all able to get out safely. Officials said that two of the three buildings affected suffered exterior damage only. 13 cars were also damaged by the plane crash.

The FAA issued this statement shortly after the crash:

"A Learjet 35 crashed on approach to Runway 1 at Teterboro Airport at 3:30 pm today. The aircraft went down about 1/4 mile from the airport in a residential area. The flight departed from Philadelphia International Airport and was headed to Teterboro. The FAA is enroute to the scene. Local authorities will release information about people on board the aircraft. We will update this statement when we get new information."

The FAA is expected back at the scene on Tuesday along with the NTSB.

Officials give their insight on the crash:
EMBED More News Videos