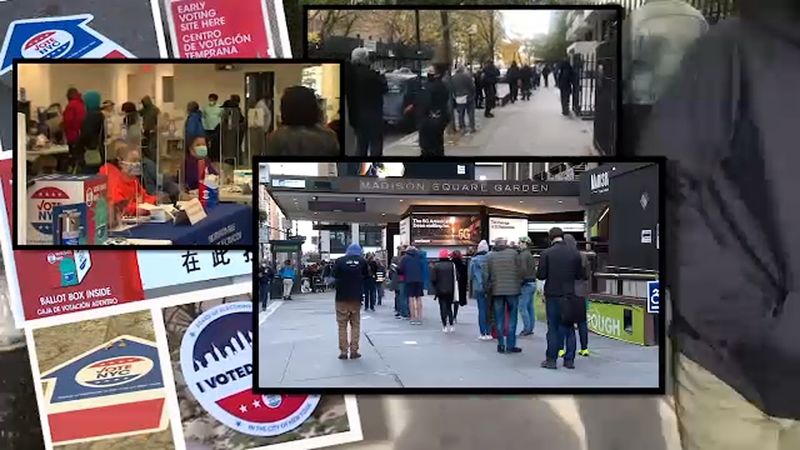 NEW YORK (WABC) -- With nine days left until the November elections, thousands of New Yorkers took advantage of voting early for the first time ever in a presidential election.

Long lines were formed at voting locations across New York all day Saturday and Sunday.

Ocasio-Cortez expressed how "emotional" it is to vote and a "privilege every single time."

She also made it clear that waiting in line for longer than two hours is not acceptable and a form of voter suppression.

"It was a thrill to see how many people who are overcoming this injustice waiting in the lines anyway, bringing community supplies, snacks, lawn chairs," Ocasio-Cortez said. "We are going to overcome this hurdle, so we can elect the folks that will make sure that this is not a problem in the future."

She then moved on to some other community events in the borough.

Some in line said lines were so long Saturday they decided to come out on day two as early as 6:30 a.m. to wait until the site opened at 10 a.m.

On the Upper West Side, a long line of voters wrapped around the Starbucks building waiting to vote on 63rd and Broadway.

More than 93,000 voters turned out to the polls on the first day of early voting in New York City.

Madison Square Garden and the Barclays Center opened to voters for the first time ever. Lines there were long and voters were told it could be a three or four-hour wait.
EMBED More News Videos

Early voters line up outside Barclays Center in Brooklyn.

60,000 people are expected to cast a vote there over the next week.

In locations from Queens to Brooklyn, lines wrapped around corners and some waited hours to cast their vote. There are about 12 million voters in New York state and more than two-thirds are expected to turn out for this election.

CLICK HERE to find your polling place, and CLICK HERE to browse by county for times and places where you can vote early.

RELATED: New York early voting: What you need to know