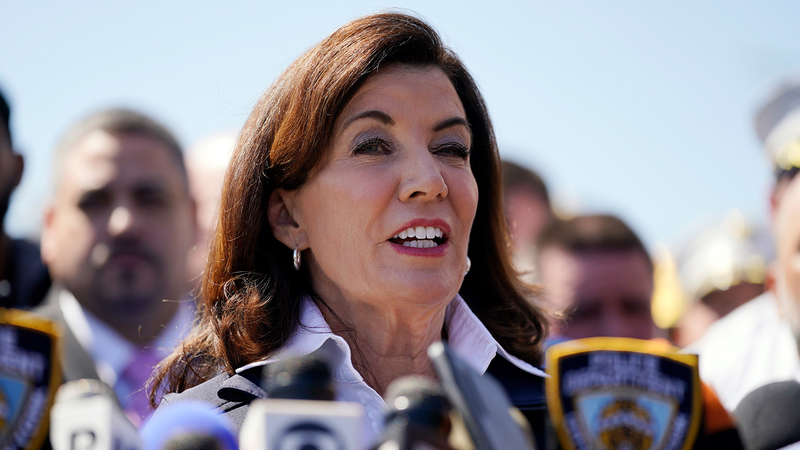 NEW YORK (WABC) -- New York state is setting aside $35 million to support abortion providers in the wake of a leaked draft that indicated the Supreme Court is poised to overturn the landmark Roe v. Wade ruling.

"$25 million will expand capacity and access for patients," she said. "We are announcing $10 million in security grants for reproductive health care centers, and no one should feel unsafe accessing health care, abortion care."

She says there is an urgent need to provide these resources as the state prepares for an influx of people from out of state seeking safe abortion services.

There have been big crowds of pro-choice demonstrators all weekend.

"To truly ensure that anyone seeking an abortion in New York has access to that, we have to make sure that the providers have the resources and the capacity to accommodate all of the patients that walk through their doors," Hochul said. "It's simple, if we're going to guarantee the right to an abortion, we have to guarantee access to an abortion. And as I said last week, we're not just playing defense, we're playing offense. And that's why we're taking immediate action starting today to deliver $35 million in unprecedented funding to urgently support abortion providers to provide access and this vital care."

The governor announced the funding as state lawmakers are expected to approve a series of measures meant to strengthen the state's already strong abortion laws on the books as early as next week.

Lawmakers are also considering the first passage of a constitutional amendment that would enshrine the right to abortion.

The announcement came one day after Attorney General Letitia James announced a fund to support the abortion rights of low-income New Yorkers as well as people coming from states that ban abortion.

The Reproductive Freedom and Equity Program would provide funding for abortion providers and non-profit organizations to help increase access to care, funding for uncompensated and uninsured abortion care, and providing resources to support the needs of individuals accessing abortion care.

If Roe is tossed, 26 states are expected to immediately ban abortion, and as states have passed laws restricting access to abortion, the number of people traveling to New York for care has already grown.

According to the CDC, 9% of the abortion procedures performed in New York in 2019 were for people from out of state.

If Roe v. Wade is overturned, that number is likely to increase to more than 32,000 procedures a year from individuals traveling from only Ohio and Pennsylvania to New York, according to the Guttmacher Institute.

"Bans will not stop abortions," James said. "Bans will only stop safe abortions. No matter what happens in the weeks to come, New York will always fight to protect our right to make decisions about our own bodies and expand access to this critical and lifesaving care."

The legislation, if adopted, instructs the state health department to oversee the fund and distribute money to providers and nonprofits to help increase access to care, funding for uncompensated and uninsured abortion care, and providing resources to support the needs of individuals accessing abortion care.

"It is about health, it is about justice, and it is about dignity," said state Assembly member Jessica Gonzalez-Rojas, a sponsor of the legislation. "Tens of thousands, hundreds of thousands of people are going to turn to New York for access to abortion care, and we have to be ready, willing and able to welcome everybody."

These 26 states are home to more than 40 million women of reproductive age.

"We know what happens when women are unable to control their own bodies and make their own choices and we will not go back to those dark times," James said. "New York must lead the fight to keep abortion safe and accessible for all who seek it."