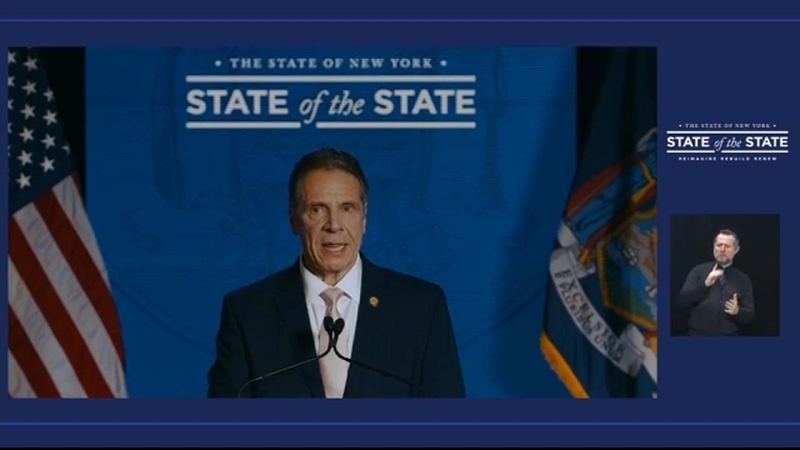 NEW YORK (WABC) -- Governor Andrew Cuomo outlined an ambitious vision for public sector redevelopment - including major renovations of Penn Station and the Port Authority Bus Terminal - during day four of his State of the State address.

Citing New York's long history of spearheading major public works projects, Cuomo announced an ambitious $306 billion infrastructure improvement program, which he called the largest ever undertaken by any state in the nation.

At the center of the planned projects is a massive, $51 billion Manhattan Midtown West development, to be created on 140 acres.

The transit-oriented development would build on the vision for Penn Station that included the January 1st opening of Moynihan Train Hall.

The project also calls for the addition of two new tunnels under Hudson River connecting to New Jersey - part of the long-stalled Gateway Project - plus the renovation of the existing tunnels.

The Manhattan Midtown West project also calls for redevelopment to spread well beyond Penn Station: east to Broadway and west to the Hudson River.

A $1.2 million expansion of the Jacob Javits Center is planned for this year, Cuomo said, along with a major residential development in the area.

The plan also calls for expanding the popular Highline east to Moynihan Train Hall and, in Phase 2, north to Pier 76, which would be upgraded to a park.

Finally, the plan calls for the renovating and modernizing the Port Authority Bus Terminal.

Thursday's segment wrapped up the governor's 2021 State of the State address, which was streamed live this year in a multi-part format over four days due to COVID-inspired restrictions.

On Wednesday, Cuomo unveiled a series of renewable energy projects as part of his focus on the green economy.

Tuesday's segment focused on programs to bring back the arts in the state, and to increase broadband access for low-income New Yorkers.

Josh Einiger has the latest on the new mega-vaccinationa sites set to open in New York City.