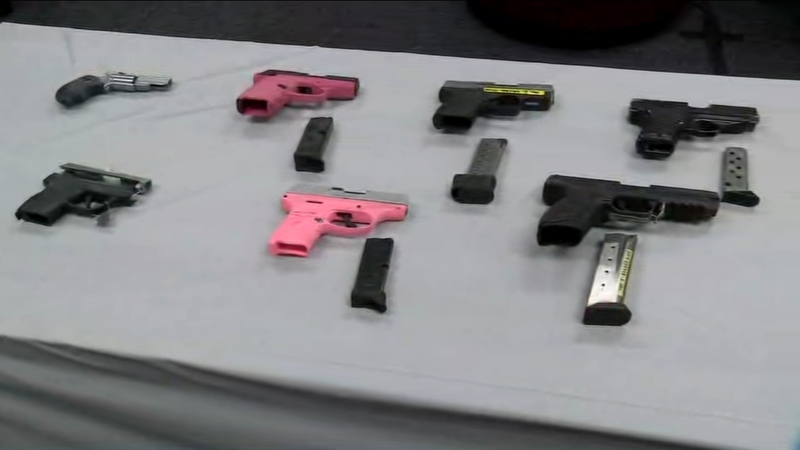 QUEENS, New York City -- More than two dozen reputed gang members have been charged in a 141 count indictment in Queens, including two who were allegedly responsible for the stray bullet death of a 53-year-old school teacher walking his dog.

George Rosa was walking near the Queensbridge Houses when he was shot after two alleged gang members from the Ravenswood Houses fired at and missed a rival on July 25, 2020. He died just over a month later.

Queens District Attorney Melinda Katz and NYPD Chief of Detectives James Essig on Thursday announced the arrests of 28 alleged members of warring gang factions within the Queensbridge and Ravenswood public housing developments, who are variously charged with murder, attempted murder, attempted assault, criminal possession of a weapon and other crimes.

They are all charged with conspiracy to commit murder and possession of illegal firearms.

They offer workshops for young people, teaching them about health and wellness, leadership, mindfulness, financial literacy and employment.

"Gang warfare will not become the norm in Queens County," Katz said. "My office is committed to working with our law enforcement partners to make certain no community should live and be terrorized by violent gang members who demonstrate a complete lack of regard for human life. As alleged, these defendants have been drivers of gun violence, sometimes in broad daylight, and often with innocent by-standers nearby, in Long Island City and Astoria over the past few years. The indictment announced today covers multiple conspiracies, 20 acts of violence and related weapons possession incidents. The violence, motivated by a desire for geographical supremacy by gang members, created a climate of fear in Queensbridge and Ravenswood."

Defendants Below Alleged To Be Affiliated With Jet Blue:
--Donovan Harvey, 23
--Jakya Jones, 21

"The NYPD spares no resource in dismantling the violent gangs and crews that prey on people in our city's communities," NYPD Commissioner Dermot Shea said. "I commend our police investigators, and the prosecutors in Queens District Attorney Melinda Katz's office, for their sustained vigilance in leading us to justice with these criminal charges."

Authorities say it was common practice for members and associates of one group to travel to territory controlled by another, typically in a vehicle, to seek out rival gang members to target, a process referred to as "spinning" or "spinning the block."

These alleged acts of violence between rival gang members were typically precipitated by such "spinning." It was also part of the conspiracies for members and associates to purchase, possess, transport, and keep readily available loaded firearms and ammunition.

Katz said the earliest alleged act of violence charged in this indictment occurred on May 18, 2019, on 10th Street near 40th Avenue, where video surveillance allegedly shows defendant Donovan Harvey pass a firearm to another defendant, who then fired several shots at an unknown target.

The pair then ran into a building in the Queensbridge Houses and went up to the rooftop, where a loaded gun was recovered. Several months later, the two defendants were overheard on a phone call talking about the shooting and stating the target was Jahi Mays, who is alleged to be a member of the Makk Ballers.

A 39-year-old innocent bystander was struck in the right thigh while attempting to shield his three children from a shooting at a Bronx car dealership last year.

On July 3, 2019, according to the charges, defendants Steven Johnson and Tyler King, reputed members of the Makk Ballers street gang, were observed on surveillance video walking across the Queensbridge housing complex and engaging in gunfire with several members of Jet Blue, hitting one in the foot.

Three days later, according to the charges, defendant Jayka Jones, in retaliation for the July 3 shooting, chased King through the courtyard of the Queensbridge Houses and allegedly shot at him multiple times in broad daylight as nearby residents scurried for cover.

King escaped unharmed. One of the bullets, however, pierced the kitchen window of an apartment and landed on the kitchen counter.

A week later, Jones and other Jet Blue members allegedly succeeded in shooting King twice during a drive by.

Katz said that on May 19, 2020, around 3:30 a.m., defendant Tyheem Valles was directing his girlfriend as she tried to parallel park a car on 40th Avenue when a black automobile approached, and video surveillance of the scene shows someone lean out of the passenger side window and fire multiple shots at the couple.

The black car then stops, and there are several more shots fired - this time from the driver's side. The woman was struck by a ricochet in the forehead, and she was taken to a nearby hospital and recovered from the injury.