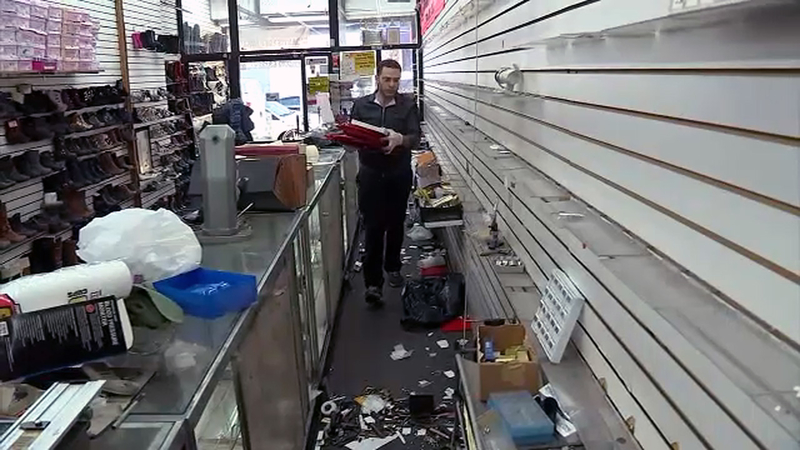 CORONA, Queens (WABC) -- Police are investigating a brazen robbery of a jewelry store in Queens after a thief broke in through the roof and made off with 90 percent of the store's inventory.

It happened sometime overnight Thursday at Shlomi Jewelry on Junction Boulevard in Corona.

Authorities say the suspect climbed atop the building and somehow gained entry through the roof, before cutting the wires to the surveillance equipment.

The suspect spent more than four hours meticulously working his way though the business, stealing more than $1 million worth of merchandise before fleeing the scene.

"They're sitting here at least like five hours, emptying almost everything in the store," owner Shlomi Sakal said. "Cut the alarm, cut the camera, cut the wire, cut the roof."

Sakal said his alarm company didn't call police until 6 a.m., and no one ever called him.

The lack of surveillance video has hampered the investigation, but authorities say they are attempting to zero in on the car used.

"A lot of work to do," NYPD Chief of Detectives Dermot Shea said. "One of the things that we'll look at, obviously, is any connection to any other incidents both inside New York City and outside."

The burglary is reminiscent of some other high-profile heists in Queens involving rooftop break-ins. But this one has devastated the livelihood of a man running a small family-owned business.

"I have five kids, my wife, and me," Sakal said. "I have my dad and my mom. I have my brother, six kids, and we eat and drink from this store, OK. And right now, we don't know how we're going to cover."

Additionally, the burglar also stole Sakal's "Tzedakah" box, which is essentially a charity container. He says it contained around $3,000 he was collecting for poor people in Israel.