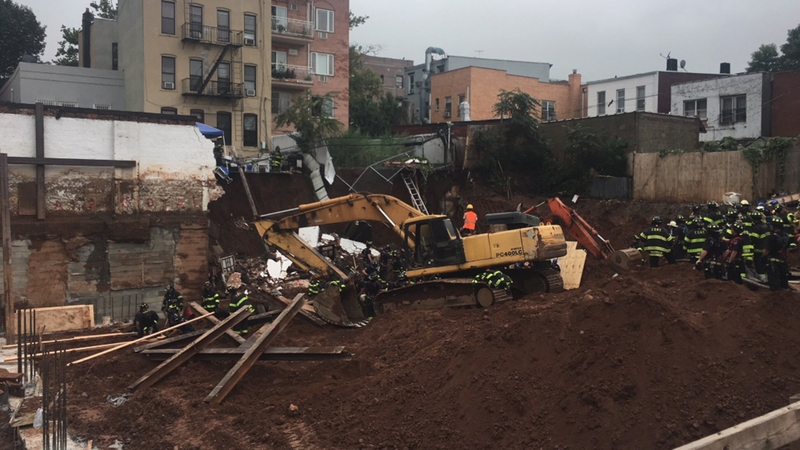 SUNSET PARK, Brooklyn (WABC) -- Firefighters have recovered the body of a construction worker who was killed in a wall collapse in Brooklyn Wednesday.

The victim was identified as 47-year-old Luis Almonte, who was pronounced dead at the scene.

The incident happened at 714 39th Street in Sunset Park.

The FDNY confirmed Almonte was buried after the brick wall toppled around 1:30 p.m.

They were not able to reach him Wednesday, and heavy rain complicated and hampered their efforts. Emergency management officials spent hours Wednesday night mapping out a plan to recover the worker's body.

"If you can see the whole structure, the back structure was actually gone," said NYPD Deputy Inspector Emmanuel Gonzalez. "There was a total of six. Five gentlemen were able to get out and that one person is still under the rubble."

Firefighters and police officers converged on the site where a 20-foot retaining wall collapsed onto construction workers, who were apparently clearing a foundation below.

Rescuers spent two hours digging at times with their bare hands until it became too risky to continue.

Dogs were brought in to try to pinpoint the man's location, but were unsuccessful.

Authorities used tiny cameras and listening devices but there were no signs of life amid the debris.

First responders were shoring up and searching the rubble, but safety was a concern.

Inspectors from the Department of Buildings and structural engineers were on the scene helping the FDNY.

Con Edison was also called in to help with a vacuum truck, which sucks up debris and clears it faster.

The contractor, identified as Ground to Sky City Builders of Yonkers, could not be reached for comment. The site had permits and there is no record of complaints or violations.

But City Council member Carlos Menchaca has serious concerns based on what investigators have told his office.

"This is a wake up call that we keep getting over and over and over again," said Menchaca. "And these incredibly dangerous developers and construction companies are not adhering to the Department of Buildings standard on how to secure sites with retaining walls and that's what you're seeing here."

Emergency management officials say they agonized over suspending the search but still needed extensive efforts to shore up the site before they could continue.