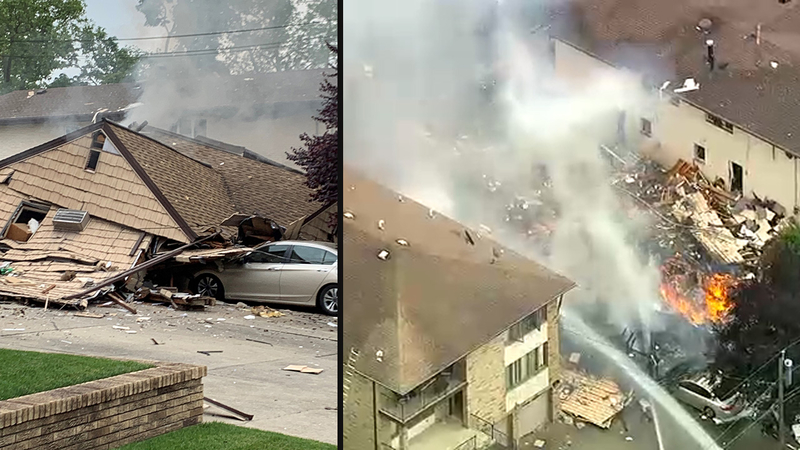 RIDGEFIELD, New Jersey (WABC) -- The man who was pulled from the rubble after his home exploded in New Jersey Monday has died from his injuries.

Authorities identified the victim as 48-year-old Mark Schellack, who lived at the home on Abbott Avenue in Ridgefield.

He was badly burned and died in the early morning hours of Tuesday at St. Barnabas Medical Center, where he had been airlifted after being rushed to Hackensack University Hospital following the 11:30 a.m. blast.

"My son used to play with him, and I knew the whole family," neighbor Barbara Maguire said. "They lived here many many years."

The investigation into the cause of the explosion is ongoing, but authorities say it appears that the source was natural gas.

PSE&G conducted a pressure test and concluded that there were not any leaks in the gas line spanning from the street to the home, indicating that the explosion was exclusive to an event within the residence.

"He'd play with his nephew," Maguire said. "His sister had a little boy, so he would play with him. And if you asked Mark for anything, he would do it for you. He was just a nice, nice guy."

Witnesses described a noise that sounded similar to a plane crash, and many of them grabbed their kids and ran for safety before they knew what was happening.

The explosion littered the street, sidewalk and nearby cars with debris. Neighboring homes were damaged and had to be evacuated.

Lisa Calabria lives next door, and her windows were blasted out and her door blown off. The home on the other side is boarded up, as well.

Still, area residents were more concerned about the loss of their neighbor.

"He just took care of everything," Maguire said. "Mowed the lawn, and I was saying just the other day he was out washing the car."

Neighbors say it was the home in which his parents raised him, and tragically, his father died in a motorcycle accident on the same street around five years ago.