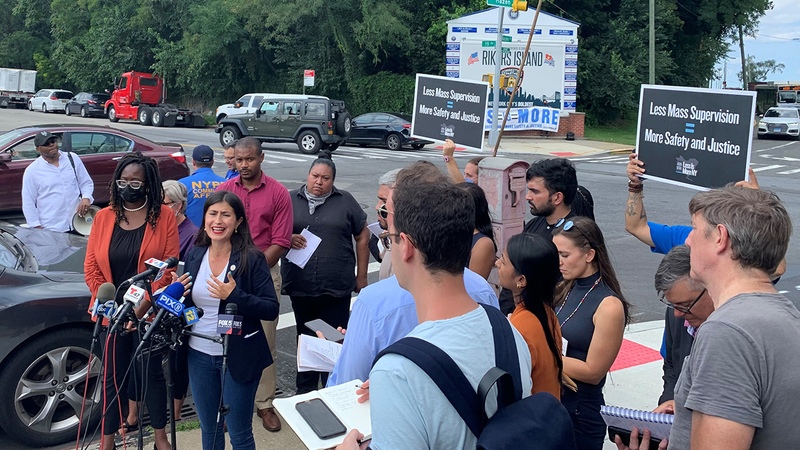 RIKERS ISLAND, New York City (WABC) -- More than a dozen local and state lawmakers went on a private tour of Rikers Island Monday morning and used the words "tortuous," "inhumane" and "horrific" to describe the conditions they witnessed inside.

Their tour comes one week after a 7 On Your Side Investigation found an increase in violence taking place inside the jail complex, and some assaulted officers told Eyewitness News they were afraid to go back to work.

"It is a nightmare, a nightmare back there," state Senator Jabari Brisport said.

One lawmaker said dogs in kennels are treated better than the 6,000 inmates.

They said some people have been inside the jail intake for more than a week with no access to food, bathrooms and medications and no contact with attorneys.

"The toilets are overflowing onto the floor," Neighborhood Defender Service Managing Director Alice Fonteir said. "They're packed in, 25 people in a cell, without masks, brought off the streets and crammed into here. There are court appearances that have been missed."

The lawmakers and officials pleaded for prosecutors not to send any new inmates to the jail and for Governor Kathy Hochul to sign a new bill that could let up to 1,000 inmates go who are inside on technical and parole violations.

Our 7 On Your Side investigation showed the number of inmates is up, while the amount of officers is down due to retirements and resignations.

As a result, some corrections officers are working up to 25 hours at a time and calling out sick in record numbers.

"Now they want to let all of the criminals out on the street, as if there's not enough crime in the streets," Correction Officers' Benevolent Association President Benny Boscio, Jr., said. "Yes, inmates are suffering. Corrections officers are suffering 25-plus hours working straight, no meal breaks, then they wonder why they're not coming to work."

The Census highlighted New York City's booming population over the past decade, but it doesn't take into account those who have fled the city during the pandemic.

Most people who toured the complex, along with the union president, called on Mayor Bill de Blasio to take action.

During a press briefing Monday morning, de Blasio said new officers will be hired and the ones who are out sick need to come back to work if they can.

"We, for years and years, have been working to change the situation in a place that's profoundly broken and should've been closed a long time ago and we are closing," de Blasio said.