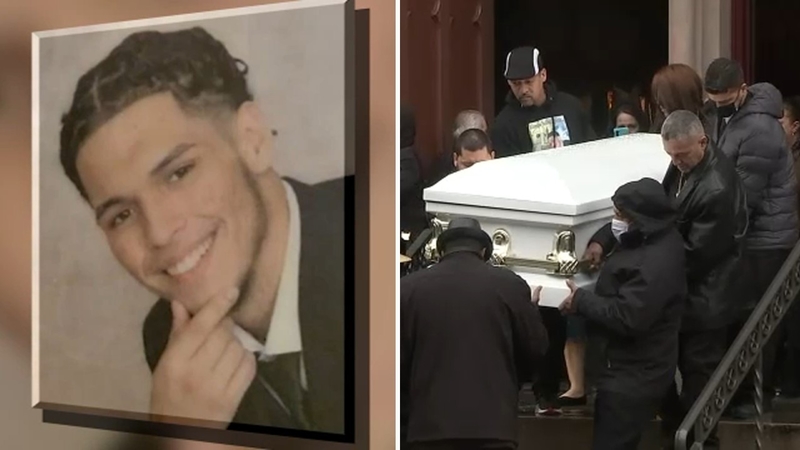 PATERSON, New Jersey (WABC) -- Family and friends gathered Friday at a funeral for a teenager who was killed when he was caught in the crossfire of a gun battle in New Jersey.

Cuadra, 18, was helping his grandmother bring groceries inside her home when the shots rang out.

Two of the suspected shooters, Jaquin Williams and Jahed Jones, both 19, were in court Wednesday, with the judge ruling they would remain in custody pending trial.

A third suspect, 18-year-old Kahaz Heron, is expected in court next week.

His mother showed great composure as she said goodbye to her firstborn child.

"He was the love of my life, he's my everything, he's my strength, he's my weakness, he's everything," Ivernis Santiago said. "He was a brother, an uncle, a nephew, a cousin, a best friend -- he was just an amazing kid."

"He didn't deserve this, he deserved to be with us," Marisol Sanchez said.

His smile was like a dazzling beam of light and mourners said his senseless murder claimed the life of a young man who had a bright future which is now gone for good.

Cuadra's family says he was excited for college and had been awarded a full four-year scholarship to Montclair State University.

Cuadra was remembered as a dedicated student at HARP Academy who cared for his family and friends, a hard-working, polite, humble and intelligent young man.

The Passaic County Prosecutor's Office asks anyone with additional information about the incident to call the tips line at 1-877-370-PCPO or tips@passaiccountynj.org or contact the Paterson Police Detective Bureau at 973-321-1120.