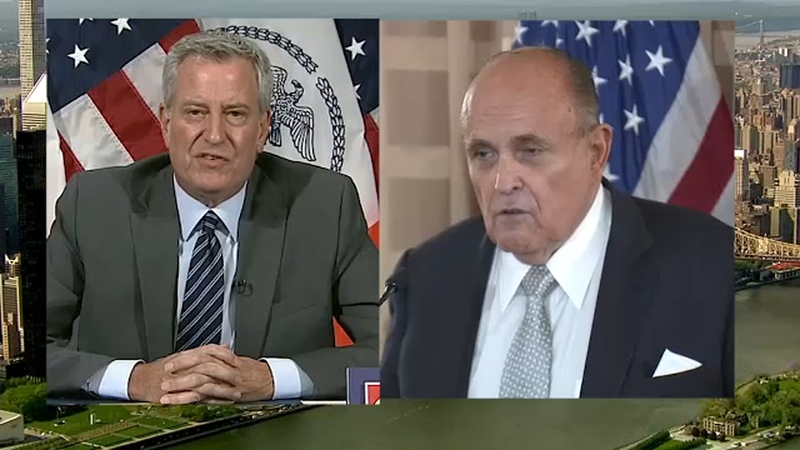 NEW YORK (WABC) -- Former Mayor Rudy Giuliani delivered a harshly worded criticism of the de Blasio administration Wednesday in what was billed as the unveiling of a two-year plan to "revive" New York City.

He and local GOP leaders spoke outside the Women's Republican Club in Midtown about their strategy to get Republicans elected in an overwhelmingly Democratic city, and Giuliani didn't mince words when attacking the Black Lives Matter movement.

He also told Schools Chancellor Richard Carranza to go back where he came from.

"(De Blasio) has a chancellor that belongs in Cuba running their school system," he said. "Maybe he should go back to Cuba where he had his honeymoon."

He blamed de Blasio for the city's current situation, blasting the handling of the coronavirus pandemic.

"He's terrible," he said. "The man costs us way more lives than we had to lose during the pandemic. He recognized it a month an a half after the president."

Former New York City Mayor Rudy Giuliani slammed the de Blasio administration Wednesday in what was billed as the unveiling of a two-year plan to "revive" New York City.

He also touched on the economy and housing market.

"We have one of the biggest exits from the city right now," he said. "The rich people are leaving. The rich people pay the bills. Who is gonna pay for the 1.1 million school system and lunches children need?

And he saved his harshest criticism for the recent increase in gun violence and crime.

"We went from being the most dangerous city to the safest large city in America, and we remained there until this idiot took over," he said.

"I think he has amnesia," he said. "I think he's out of touch with reality. I think we've seen more and more, Rudy Giuliani become unhinged, and I'm just not waiting around to hear what he thinks...Unlike in Giuliani's time, this police force works with the people in New York City, works with neighborhoods, listens to people and tries to create unity."

Giuliani said that despite calls he hears, he is not running for mayor again.

"I have Democrat's who come up to me and say, 'We loved you. You were a great mayor. We started hating you when you represented Trump. We'd take you over de Blasio,'" he said.

He and the GOP leaders said they know how to remedy a recent spike in violence, urban flight and homelessness.

Among the suggestions made by the former mayor was a call to put 9,000 more NYPD officers on the street to deter crime, shootings, homelessness, and support local businesses.

Giuliani said de Blasio is ruining New York city and that bail reform has allowed criminals to run the streets.

According to recent statistics compiled by Giuliani's team, there were 242 shootings in New York City in the month of August, compared to just 91 in 2019, an over 140% increase.

Murders in New York City have increased by nearly 50% and 911 response times have increased, all the while police have made fewer arrests.

There are currently 15,000 empty apartments in the caused by urban flight, while homeless levels near 60,000 across the city.

Republicans will host a first-ever New York City GOP convention to lay out more details of their plan and to present Republicans candidates running for office in the state.

Giuliani says the only thing that will save New York is a leadership change.