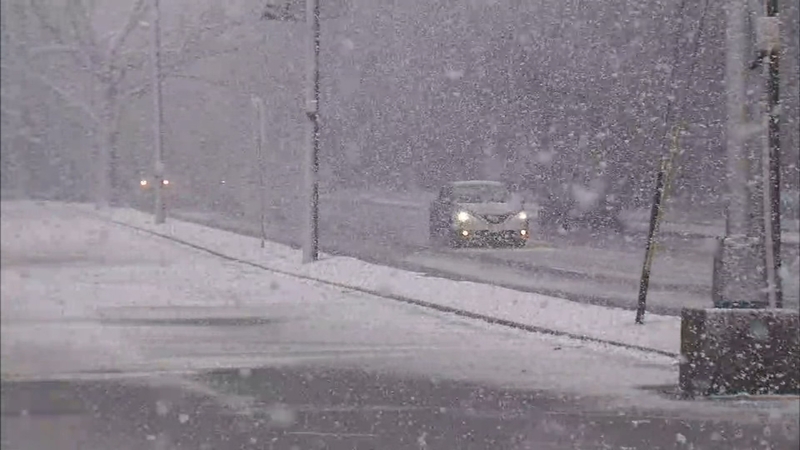 Thousands without power in Westchester after latest storm

NEW YORK (WABC) -- The second big, blustery nor'easter in less than a week barreled into the New York area Wednesday, bringing wet, heavy snow and even thundersnow to a corner of the country where tens of thousands of people were still waiting for the power to come back on from the first bout of wintry weather.

The snowfall lasted throughout the day, but the storm got a later start than previously expected in some areas.

Still, more than a foot of accumulation fell in areas north and west of New York City, with some spots receiving at least 20 inches before the storm moves out overnight.

Newark public schools were among dozens that canceled classes for Wednesday, while New York City public schools remained open. City officials announced just before 6 p.m. that will also be the case for Thursday (NYC schools will be OPEN), though some closures were already coming in across the area. CLICK HERE for the latest school closures.
EMBED More News Videos

Amy Freeze reports on the messy road conditions from Wakefield in the Bronx.

Mayor Bill de Blasio stood by his decision to keep the schools open. "The information we had didn't point to a clear and consistent reason to shut down school," said the mayor. "We knew kids could get to school safely..We knew we would have them in good shape at school. The sanitation commissioner and I checked in about what conditions would be like at the end of school, we felt confident about safety."

The New York City Department of Sanitation issued a Snow Alert, with Alternate Side Parking rules suspended through Thursday, as well as a hazardous travel advisory.

A.J. Ross reports on the road conditions on Staten Island.

The first nor'easter hit five days ago, and power outages were prevalent in Westchester County and across New Jersey even before the second storm arrived.

Downed trees blocked the restoration efforts, leaving crews scrambling before the next round of dangerous weather.

New Jersey Governor Phil Murphy issued a state of emergency, and hundreds of crews continued to work to clear trees and repair power lines across the Garden State.

The state's major utilities reported more than 300,000 customers without power by Wednesday night.

Anthony Johnson has the latest on the snow in New Jersey.

"The worst is yet to come," said Murphy after visiting various parts of the state. "We worry about outages. We're already digging out from a very frustrating hole from the weekend storm."

State offices were shuttered ahead of the storm, and non-essential employees were told to stay home.

New Jersey State Police say they responded to 506 motor vehicle crashes and 939 motorist aids since midnight in their patrolled areas.

Flooding was the bigger concern on Long Island, especially in high-risk areas, and residents were urged to keep cars off the streets to prevent damage.

"The lowest point in the street is where the drains are, so parking anywhere near those drains is kissing your car goodbye," Oyster Bay Town Supervisor Joseph Saladino said.

Getting around was more challenging than usual, and parts of Freeport, Massapequa and East Massapequa were underwater during high tide. Meanwhile, at Jones Beach, the big concern was wind and strong surf.
EMBED More News Videos

Stacey Sager reports on the nor'easter from Massapequa in Nassau County.

The lower Hudson Valley received the brunt of the snowfall, with residents in Westchester County still reeling from the previous storm. Nearly 44,000 customers were without power Wednesday night.

In Suffern, an 88-year-old woman died after being hit by a falling tree in her yard.

In Cortlandt, more than 700 residents remained without power as the snow piled up.

Among them was Teressa Davidoski, whose family relied on a generator for power as they wondered about the severity of the new storm.

"We are going to walk down the street if we have to and stay with neighbors there but we can't drive anywhere," she said.

The damage from fallen trees and power lines still blocked a number of town roads.

Westchester County Executive George Latimer called for the resignation of the presidents of Con Edison and NYSEG due to what he called their inadequate response to the first storm.