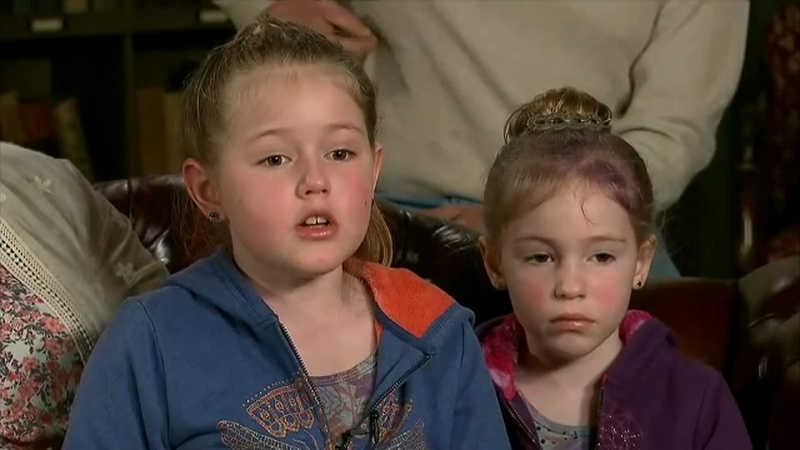 HUMBOLDT COUNTY, California -- It's being called a miracle. Sisters, five and eight-years-old, were found alive after being lost all weekend in the cold and rainy wilderness of Northern California.

Kate Larsen from ABC sister station KGO-TV spoke to Misty Carrico, the mother of the girls, by phone Sunday night. She said while they were lost, her daughters hid in a huckleberry bush and called it their "huckleberry home." She says she thought she would never see her kids again and "feels like the luckiest person in the world."

Cellphone video taken by a friend shows the moment Misty and Travis Carrico were reunited with their daughters. The girls appear from the woods, driven on separate ATVs. Travis first picks up Leia, 8, and when Caroline, 5, arrives, Misty scoops her up like a baby.

Leia and Caroline Carrico eating pizza in the hospital tonight after spending the wknd lost in the woods in Humboldt County,after wandering too far from home. Their Mom told me they hid in a Huckleberry bush and lost their voices yelling for help until rescuers found them this AM pic.twitter.com/FPueQvCMdk

"I was so worried about you," exclaimed Travis, through tears, and also let his daughter know that she's "in so much trouble."

After a break in the storm, the sisters wandered away from home Friday afternoon. They planned on walking to their favorite "rock slide" but got lost.

The Humboldt County Sheriff's Office launched a search Friday evening. Search crews used a black hawk helicopter, which the girls told their mom they heard flying above them. They screamed for help, but nobody heard.

"We had to prepare for the worst and hope for the best and so we had the best investigators on the North Coast here following up on a criminal investigation. We didn't know if there was an abduction," said Humboldt County Sheriff William Honsal. Fortunately there was no foul play, but it did rain over the weekend and temperatures dipped into the 40s.

"Hypothermia could have set in, but they kept dry, that was the key thing for these girls," said Honsal.

The Carricos live in a remote and heavily wooded area of Humboldt County, near Richardson State Park. Leia and Caroline learned survival skills through 4H and knew to stay put once they got lost. Sheriff Honsal was impressed the young girls knew how to survive in the tough conditions.

"They didn't have any food or water with them, but they knew they could drink the water from the rain, off of the leaves, and that's exactly what they did," he said.

Footprints from their rain boots led two volunteer firefighters from Piercy to the girls on Sunday morning. After 44 hours, they were found a mile and a half from home... safe, but cold and scared. Leia and Caroline were taken to a hospital to get checked out. Misty says they were given some heating blankets and food and then were sent home. She says her daughters lost their voices screaming for help and were scared they would encounter mountain lions or bears that live in the woods.

More than 200 people helped in the search and rescue operation, including teams from Marin, Napa and Sonoma counties. Sheriff Honsal says it was critical that they found Leia and Caroline when they did because colder weather is on the way.

Misty is grateful to everyone who helped bring her daughters back home and thanks everyone who helped search or donated food and supplies. She set up a GoFundMe account, because she says her driveway and her neighbors' driveways were destroyed by all the traffic over the weekend and she wants to rebuild the roads with rock.