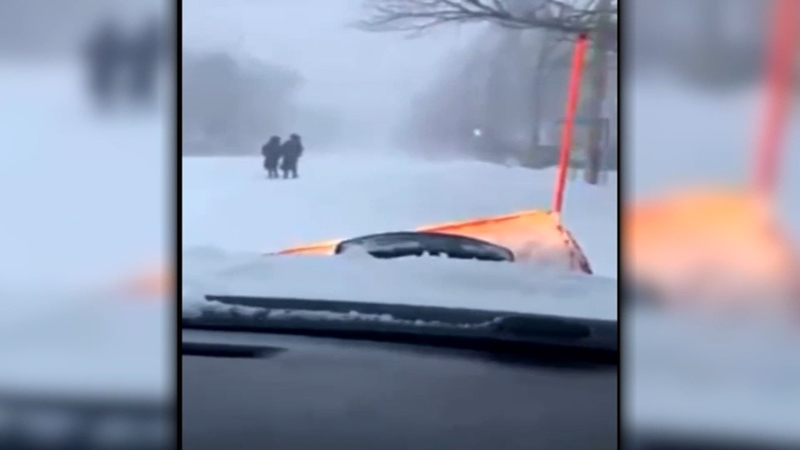 LAKEWOOD, New Jersey (WABC) -- A snow plow operator in Lakewood has been suspended for an alleged anti-Semitic act.

In a video recorded by his coworker and posted to Facebook the snow plow operator allegedly purposely slammed two Orthodox Jewish men with snow.

According to the Lakewood Scoop the caption of the video said, "This ones for you JC."

The victims are getting a lot of support from the community and online.

"They decided to fight the weather to go to synagogue go to pray, and this is what happens to them," said Rabbi Avi Schnall of Agudath Israel of America. "So it definitely it was a real shake up to them, but they're strong."

And while the Facebook post has been taken down, the evil behind the act lingers and angers.

"To post this on their Facebook page to say as if there was nothing to be embarrassed about, there's nothing to be ashamed about. I can go ahead and harass a couple of Jews walking to synagogue on their Sabbath and its a joke," said Schnall.

One of the men in the plow is now in trouble with his employer. The driver was identified as a waste management employee.

The company wrote on Facebook, "The hateful conduct depicted in this video is unacceptable and does not reflect the values of inclusion and diversity we hold as a company. The employee is suspended while we investigate the incident, but we can confirm that this behavior will not be tolerated from any waste management employee, and we will not employ those who act in this way."

Tova Herskovitz created 'One Ocean County' a diverse organization that she says builds bridges across communities for common ground.

Herskovitz says hate is why the organization focus on educating people in hopes of bringing more understanding and love to the community.

"People can come and say 'OK those things I hear about on Facebook are not true because I know Orthodox people and they're not like that and those are all stereotypes and those are all myths,'" said Herskovitz.

Eyewitness News is not publicly naming these two men in our story, because no arrests have been made yet.

Lakewood police and the Ocean County Prosecutor's office are investigating the incident.