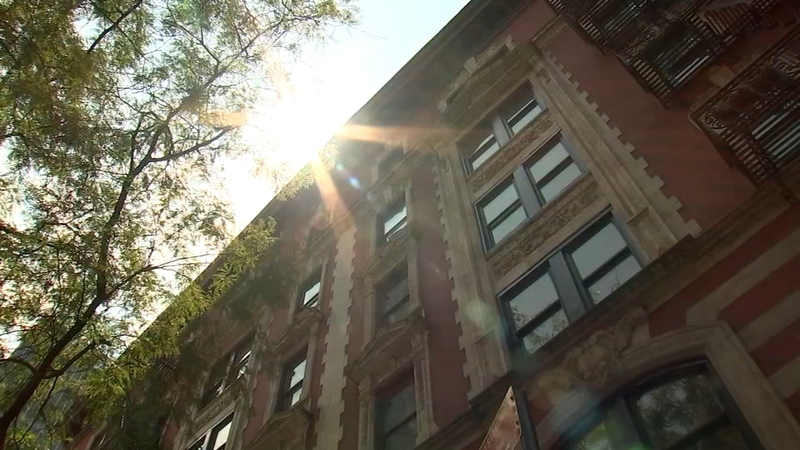 HELL'S KITCHEN, Manhattan (WABC) -- With a lack of guests due to the coronavirus pandemic, hotels across New York City are turning to homeless people to fill the rooms. And in many cases, neighbors are never notified.

Crystal Byrd told Eyewitness News she will not leave her Hell's Kitchen apartment without her bottle of pepper spray.

"I've had the mace ever since I've lived in New York City, but I've never ever had to carry it in my own building," Byrd said.

She lives in the same building as the Washington Jefferson Hotel on West 51st Street, which is no longer welcoming paid guests. It's now a homeless shelter for single men.

"All of a sudden, I walk downstairs one day, there's busloads of men getting off the bus coming into the hotel with bags of clothes," Byrd said. "I know they're bags of clothes because the bags were transparent."

Those clear bags full of clothes were also visible outside the Skyline Hotel on 10th Avenue, where an employee quickly ushered people back into the building when they noticed our camera. The homeless tenants confirmed to Eyewitness News it too is a shelter.

A phone call to the front desk sends callers to an automated message saying they're closed.

Related: 100 deaths from COVID-19 among homeless in NYC

Multiple tenants confirm the Holiday Inn Express on West 48th Street is also operating as a shelter, as are The Travel Inn on West 42nd and the high end Cachet Boutique Hotel right across the street, where rooms once rented for $300 a night.

Now, there's a metal detector and security guards in the lobby. Online, the hotel is listed as closed.

None of the hotels mentioned would immediately comment for this story.

Reginald Barham is one of Cachet Boutique's homeless tenants and recently transferred from a different shelter in Harlem.

It's part of a Department of Homeless Services plan to protect the city's most vulnerable and promote social distancing.

"These buildings are all empty anyway, so why not put them to good use?" neighbor Chelsea Pomerenke said.

Related: 7 On Your Side Investigates NYC neighborhoods hardest hit by COVID-19

But Scott Sobol, co-chair of the Hell's Kitchen Block Association, told Eyewitness News that neighbors should have been notified.

And it's not just Hell's Kitchen. The Department of Homeless Services denied our request for an on-camera interview, but they did confirm the agency now operates 139 hotels citywide as shelters. It's a program that's been active for months and is now expanding.

In an email, a spokesperson said they cannot confirm specific locations because the "addresses of locations where social service recipients are residing are protected by NYS Social Services Law."

"Why won't they tell us?" Sobol said. "Why is it a secret? Ultimately, we're the taxpayers. We're the ones funding these programs...(City Council Speaker) Corey Johnson's office is claiming they weren't alerted. I find it pretty hard to believe that the City Council speaker, the second most powerful person in this city, had no idea this was happening."

"Our city is badly failing on this issue. This awful pandemic has exposed many of the worst problems our city had already been dealing with for years, and the homelessness crisis is a truly painful example. Working to solve the homelessness crisis has been a priority of mine for my entire career, and earlier this year, I put out a robust plan that I believe would create real progress. Unfortunately, the virus had other plans, and now, the city's responsibility to protect the most vulnerable among us has created new issues. The de Blasio administration can and must do better. My office is working around the clock with business owners, Hell's Kitchen residents, DHS, and service providers to improve things, and we will continue to do so until we solve this problem."