Exclusive: Homeless man given shoes by jogger in NYC now has job offer 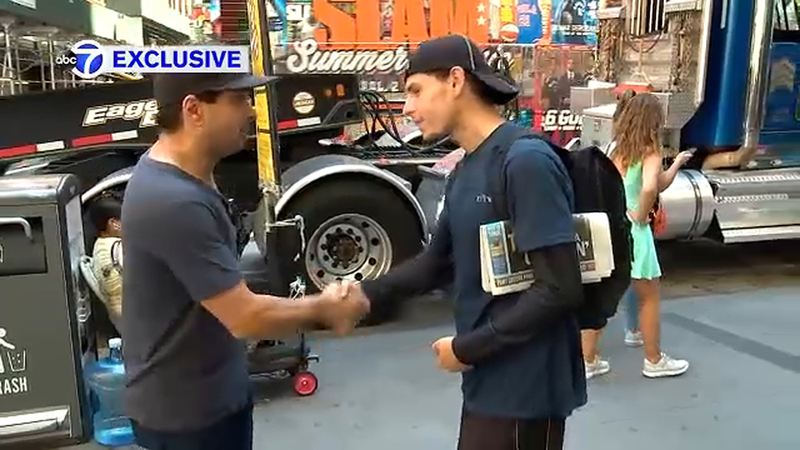 NEW YORK (WABC) -- In an act of kindness that went viral, a jogger gave a homeless man the shoes off his feet last week.

That homeless man expressed his gratitude in an exclusive interview, and promised that if anyone had a job, he would work hard and prove his worth.

Now, in another Eyewitness News exclusive, it turns out someone was listening.

In the viral video, 30-year-old Joe Arroyo was seen sitting on a street in Lower Manhattan. A woman stopped in a taxi at a red light looked over, saw something spectacular and started recording.

A stranger who was jogging stopped and noticed Joe had holes in his sneakers. The man was so moved, he took off his socks and shoes and gave them to Joe.

Arroyo said he was ready to turn his life around and was willing to work.

Andrew Zurica, a successful entrepreneur, saw our story and wanted to help. On Thursday the two men met for the first time and Zurica offered Arroyo a job.

Andrew connected with Joe on many levels. Both have lived hard lives and had run-ins with the law.

When Andrew was just 13-years-old, after his father was locked up, he began hustling on the streets. In the 1990's Zurica went to prison for four years after being arrested for international drug trafficking.

When he got out, he was determined to turn his life around and started from scratch. He started his own company, Hard Times Sundaes. He began with a food truck and the first year pulled in only $40,000. Now he owns three more eateries and is looking to expand.

Last year he made $2.9 million. Andrew is dedicated to giving back and told Joe he would be happy to have him work in one of his restaurants. Arroyo was floored by yet another kind gesture.

"I was in a hole," he said. "I didn't want anyone to pick me up out of the hole. I needed someone to throw me a ladder and I'd climb out myself. This is a ladder".

"The one thing that makes me happy is to be in a position to give back and help people in some way," said Andrew.