Cardinals GM: 'We are committed to finding out what happened' 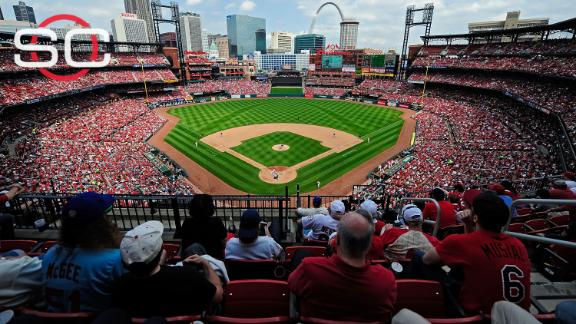 The St. Louis Cardinals say they have been conducting an internal investigation into allegations that team officials hacked into networks and tried to steal information about the Houston Astros.

In a statement released Wednesday, Cardinals chairman and CEO Bill DeWitt Jr. said the team was made aware of the allegations several months ago and, together with general manager John Mozeliak, hired the law firm of Dowd Bennett to assist the FBI in its investigation and conduct an "an internal inquiry to attempt to identify any employee that may have engaged in the alleged conduct."

"The alleged conduct has no place in our game," Mozeliak said in the statement. "We hold ourselves to the highest standards in every facet of our organization. It has been that way forever and is certainly true today. We are committed to finding out what happened. To the extent we can substantiate that these allegations have merit, we will take appropriate action against anyone involved."

Dowd Bennett attorney Jim Martin, citing the internal review, said Wednesday that high-level executives of the Cardinals were not involved in the hacking of the Astros' database.

"With what we have done so far, I am 100 percent confident that this does not touch upper management and does not involve people like John Mozeliak and Bill DeWitt,'' Martin told The Associated Press.

Mozeliak said in Minnesota at a road game against theTwinsthat he and DeWitt were not aware of any unauthorized information that the team used.

"I hope people realize today, though, that this is not something that I was aware of or Mr. DeWitt was aware of. In no way did it help inform any of our decisions."

The Cardinals said the internal investigation is ongoing and that it wouldn't interfere with the government's work.

On Tuesday, The New York Times reported that the FBI and Justice Department officials have evidence that Cardinals officials -- who were not identified -- allegedly tapped into the Astros' database and had access to statistics, scouting reports and internal discussions about players, trades and other proprietary information.

Yahoo! Sports reported that one source familiar with the investigation said the FBI connected the breach to a house in Jupiter, Florida, the city in which the Cardinals conduct spring training. The house was used by a number of Cardinals employees, according to the report, so pinpointing the culprit of the breach is complicated.

According to the Times, the FBI believes that Cardinals officials gained access to the Astros' database by using a list of passwords associated with Houston general manager Jeff Luhnow dating to his tenure with the Cardinals from 2003 until he left for Houston after the 2011 season.

"These are serious allegations that don't reflect who we are as an organization," DeWitt said in the statement. "We are committed to getting to the bottom of this matter as soon as possible, and if anyone within our organization is determined to be involved in anything inappropriate, they will be held accountable."

Stunning accusations against Cardinals
Tim Kurkjian reacts to the report that the FBI is investigating the St. Louis Cardinals for allegedly hacking into networks and trying to steal information about the Houston Astros, and he discusses potential discipline from Major League Baseball.