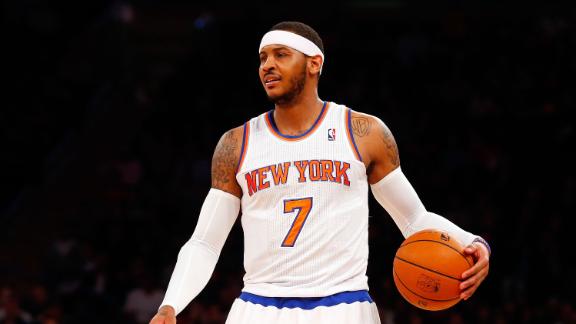 Carmelo Anthony has informed the New York Knicks in writing that he will opt out of the final year of his contract and become an unrestricted free agent, according to multiple sources.

The Knicks recently expressed the hope that Anthony would not do this. Team president Phil Jackson said recently that he hoped Anthony would consider opting into the final year of his contract and testing free agency in the summer of 2015. Jackson has privately expressed that hope to Anthony several times since the end of the regular season.

The Chicago Bulls are one of several teams with whom Anthony would consider signing, according to sources.

According to league sources, Anthony has talked to at least one high-profile person who lives in Chicago about what it's like to be famous in the Windy City.

The Bulls also have reportedly done their due diligence on Anthony in recent days. According to a report in the Chicago Sun-Times, Bulls coach Tom Thibodeau has reached out to some of Anthony's former coaches to inquire about the seven-time All-Star.

In addition to the Bulls, Anthony would consider signing with the Houston Rockets or Dallas Mavericks, sources say. The Miami Heat have also explored their available options in trying to pursue Anthony, ESPN.com reported earlier this month.

Anthony has discussed the possibility of accepting less than a max contract to help the team that he signs with attract additional free agents. He would likely have to take a significant pay cut to sign with the Heat.

Jackson, the Knicks president, said late last month that he's "not losing sleep" over Anthony's free agency but is "definitely concerned" about the idea of Anthony signing elsewhere.

The Knicks are coming off of a 37-win season and they aren't projected to have much money to offer free agents this summer. New York also doesn't currently have a pick in the 2014 draft, but has inquired about acquiring one.

So Jackson and the Knicks are expected to try to sell Anthony on the idea that they can add a star to the roster in the summer of 2015, when they are expected to have significant cap space.

Anthony also endorsed Jackson's decision to hire Fisher as coach. "I like what Phil is doing," he said.

If the Knicks fail to re-sign Anthony, they aren't projected to get much salary cap relief. With contracts for Amar'e Stoudemire ($23.4 million), Tyson Chandler ($14.6) and Andrea Bargnani ($11.5 million) on the books, the Knicks are projected to be over the salary cap with or without Anthony's salary.

Jackson has hinted that he is prepared for the possibility that Anthony re-signs and for the potential to have to move forward without the seven-time All-Star.

Information from ESPNNewYork.com's Ian Begley contributed to this report.

Most Likely Landing Spot For Carmelo
Tom Penn gives his take on which team he thinks Carmelo Anthony will end up signing with.

Carmelo Plans To Become Free Agent
Marc Stein discusses the report that Carmelo Anthony will opt out of the final year of his contract with the Knicks and with which team Carmelo is likely to sign.

Report: Carmelo Anthony Will Opt Out
J.A. Adande identifies the most likely destinations for Carmelo Anthony, who will reportedly opt out of his contract with the Knicks.