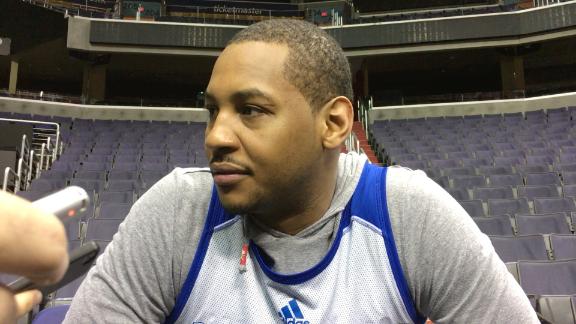 The New York Knicks continue to pursue Kevin Love in advance of the Feb. 23 trade deadline despite the Cleveland Cavaliers' unwillingness to part with the All-Star forwardin a deal for Carmelo Anthony, according to league sources.

Sources said the Cavaliers, meanwhile, do maintain an interest in Anthony -- which would pair him with Cleveland star and close friend LeBron James -- but only if a deal can be struck without the league's reigning champions surrendering Love.

ESPN first reported last week that the Cavaliers had rebuffed the Knicks' attempts to swing an Anthony-for-Love swap.

The Knicks, sources say, have continued to engage the Cavaliers, LA Clippers and Boston Celtics in trade talks, believing those are all the teams Anthony would find appealing enough to surrender his trade-blocking ability if a deal could be struck.

Many of the Knicks' recent discussions with both the Cavaliers and the Clippers, sources say, have featured theoretical three- or four-team trade constructions because of the complexities involved in trading Anthony with two seasons and $54.2 million left on his contract after this season.

Anthony, for his part, was adamant Tuesday when speaking with local reporters that he has not provided the Knicks with a list of potential destinations he considers sufficiently attractive to waive his no-trade clause.

"I haven't told anybody anything," Anthony said Tuesday. "I haven't had that conversation with anybody."

The Knicks and Clippers, as ESPN first reported last week, have been searching for a third team to help them facilitate an Anthony deal.

That's partly because New York, according to sources, is reluctant to take on the contract of Jamal Crawford in any trade, with the guard, who turns 37 in March, due to earn nearly $14.2 million in 2017-18 and guaranteed at least $4 million of his scheduled $14.5 million in 2018-19.

But another significant complication in a potential Anthony-to-LA deal is the 32-year-old's 15 percent trade kicker, which would tack an extra $9.6 million on to the remaining value of his contract if a trade is completed. Because the Clippers are hard-capped this season -- after signing Wesley Johnson to a full midlevel deal -- league rules prevent Anthony from amending the trade bonus in a meaningful way to help facilitate a trade.

So the Knicks and Clippers realistically have no choice but to find a third team if they hope to make a deal happen, which would put longtime friends Anthony and Chris Paul on the same team.

Anthony, however, said this week that family considerations play a huge role in his well-chronicled determination to stay in New York and would make accepting a trade anywhere difficult.

"That's more what I care about -- my family," Anthony said Tuesday. "My son being comfortable at an age now [9] where he's really getting an opportunity to understand being in New York and having a home there and having friends there. My wife working there and having her opportunities there ... I think about that more so than my decision for my career.

"At the end of the day, it will come down to my decision. But I think more about my decision and what they're going to have to go through if anything would happen."

ESPN reported last week that Boston and New York haven't gone beyond exploratory discussions when it comes to Anthony, who would bring some star power but doesn't appear to address either of the Celtics' biggest needs -- defense and rebounding.

Anthony is one of only three players in the league who possess a full no-trade clause alongside James and the Dallas Mavericks' Dirk Nowitzki.

When asked Tuesday what it would take for him to waive his no-trade clause, Anthony said, "I don't know. It's something I would have to think about. I think it's more so what direction the organization wants to go. I've said this before: If they feel like they want to go in a different direction, rebuild and start fresh, then that's something I will consider. I've always said that."