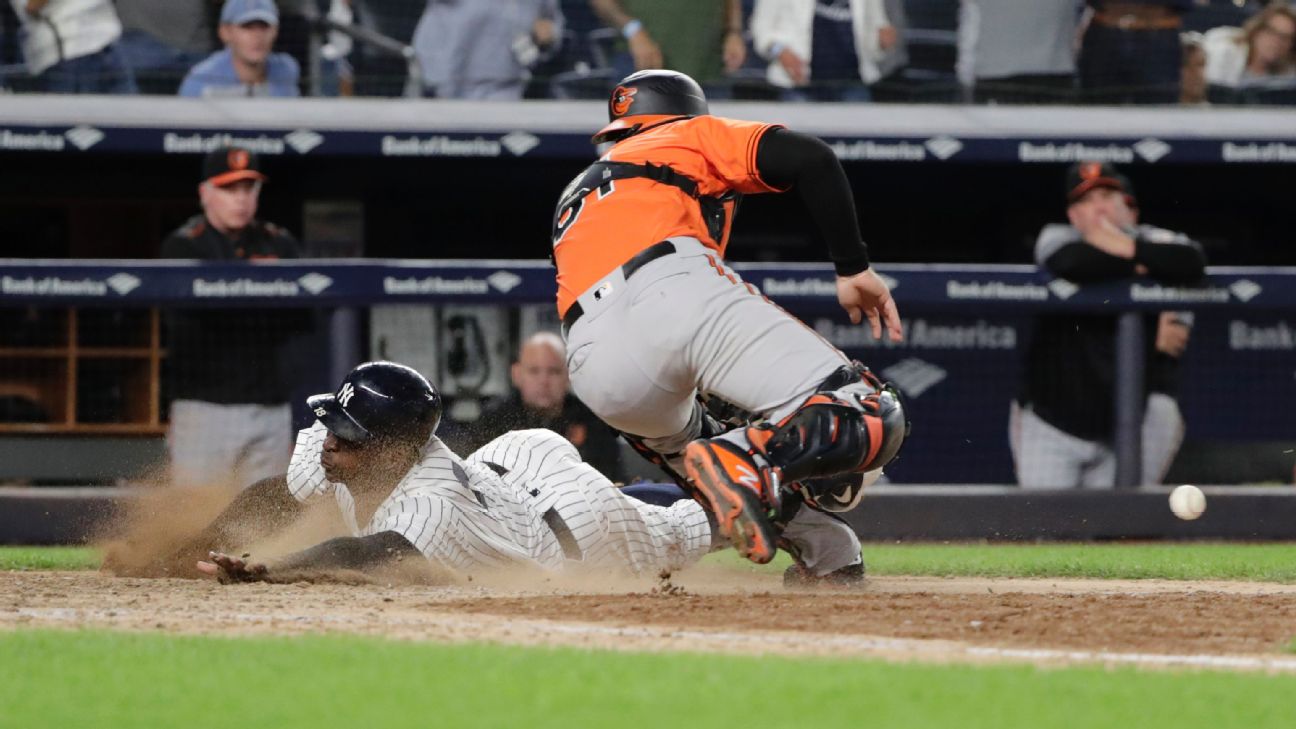 NEW YORK -- A day after one of the most joyful moments of the New York Yankees' season, the club found out that its celebratory game winner might have been quite costly.

On the very play on which Didi Gregorius slid headfirst into home to help the Yankees earn a walk-off, playoff-clinching win Saturday night, the shortstop tore cartilage in his right wrist. The injury could sideline him for the remainder of the season.

While sharing the news of Gregorius' injury with reporters after Sunday's 6-3 home loss to the Baltimore Orioles, manager Aaron Boone expressed uncertainty about whether his team will finish the regular season and go into the postseason without the valuable veteran and defensive playmaker.

An MRI on Sunday morning revealed a small tear. Following the MRI, a cortisone shot was administered, which Gregorius said made him feel a lot better. As he was preparing to make the Yankees' flight to Tampa for a four-game series with the Rays, he said the only pain he felt in the wrist was soreness.

"I have some movement in there," Gregorius said. "They say things like this happens to other players, but some of them play through it. So we're going to see day-to-day how it goes, and if I feel better, I'll be back in there so we can still make the playoff decision."

Boone said the plan is to re-evaluate Gregorius in the coming days after the shot has had a chance to take effect. Once that happens, the team will have a better idea of whether he will be able to play through the injury.

"I always play through pain," Gregorius said. "Nobody plays this game 100 percent healthy."

Gregorius remains optimistic that he will be in the lineup by the American League wild-card game on Oct. 3.

If he isn't available for that game, the Yankees likely will stick with the plan that was on display Sunday. Waiver trade-deadline acquisition Adeiny Hechavarria started at short in place of Gregorius, and rookie Gleyber Torres moved to the position late in the game as the team made a few eighth-inning changes.

Until Gregorius can return, the Yankees know they have quite the hole to fill both offensively and defensively.

"He's an important part to our lineup," center fielder Aaron Hicks said. "He's a guy that we can lean on day-in and day-out to play Gold Glove defense."

Along with Saturday's clutch score, which came as Gregorius raced from first base on Hicks' 11th-inning double down the left-field line, the shortstop has had a productive year. Gregorius is hitting .268 with 27 home runs and 86 RBIs.

Gregorius, who sported a circular Band-Aid on a small spot on the outside of his right wrist, believed the injury came as his right hand got stuck in a hole in the right side of the batter's box as he dove into home. Replays of the slide show that as his left hand touched the plate, his right hand bounced on the ground, getting caught a bit on his side.

Between the adrenaline and the playoff-clinching celebration that ensued on the field and later in the clubhouse, Gregorius said he felt nothing.

"We were celebrating, and everything was fine," he said. "I went home fine, I woke up this morning, and it wasn't feeling good."