Survey says: Stephen Gostkowski is the best kicker in the league 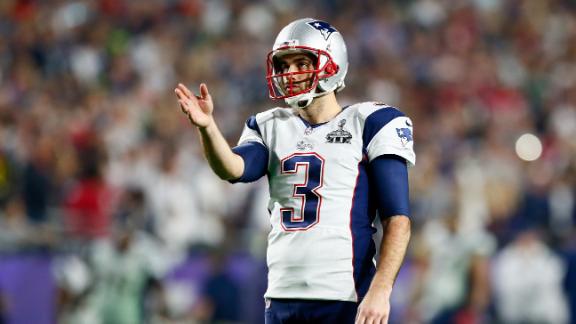 Who are the best kickers in the NFL?

ESPN.com's NFL Nation posed that question to 24 NFL kickers after Week 4 of a season that has been difficult for the position. Kickers in Pittsburgh, Tampa Bay and Washington have already gotten the boot, and the impact of moving extra points back to the 15-yard line is a hot topic.

The best in the business, according to his peers, is Stephen Gostkowski of the New England Patriots. He had 18 votes, followed by Baltimore's Justin Tucker (13) and Indianapolis' Adam Vinatieri (12).

"Adam Vinatieri ... unbelievable what he's still doing," Denverkicker Brandon McManus said. "The other two people right now who have been kicking unbelievably are Gostkowski and Tucker. Both of those guys kick in outdoor stadiums, tough conditions. Tucker's got a huge leg. Gostkowski has been killing it in the playoffs and been so clutch. Tucker just had a clutch kick [52-yard game-winner] against the Steelers just a week ago.

"And Vinatieri -- the ultimate clutch kick is the Super Bowl, and he's done it multiple times."

This doesn't guarantee each one will be with his current team by the end of the season. Coaches seem to have a short fuse with kickers, even though the percentage of field goals made so far this season (83.75) is almost identical to the rate (84.75) after four games a year ago.

The most notable change is that the extra point was pushed back from the 2-yard line to the 15-yard line. There have been 17 missed attempts from 33 yards after only eight misses all of last season from 20 yards.

What elevates kickers to the top of their profession? Consistency, taking advantage of spotlight moments and having a strong enough leg to consistently get touchbacks on kickoffs. Gostkowski and Vinatieri got a lot of votes because they've been doing all of the above for a long time -- Gostkowski since 2006 and Vinatieri since 1996.

Both also came into the NFL with New England. Whether that's a coincidence or not, the Patriots have been the most successful team in the league for more than a decade.

"Vinatieri and Gostkowski have been killing it for just a really long time," Clevelandkicker Travis Coons said. "And they've been not just good; they've been great."

A kicker's life isn't as simple as "see ball, kick ball." Gostkowski explains: "Some people play in good conditions every week; some play in bad. Some people are on a team that gets to score a lot of points, and some people don't get a lot of opportunities. It's a mental game, and the guys that impress me are the guys that do it for a long period of time."

NFL Nation polls kickers about who is the best in the league
Stephen Gostkowski, Justin Tucker and Adam Vinatieri are ranked by their peers as top kickers in the NFL.