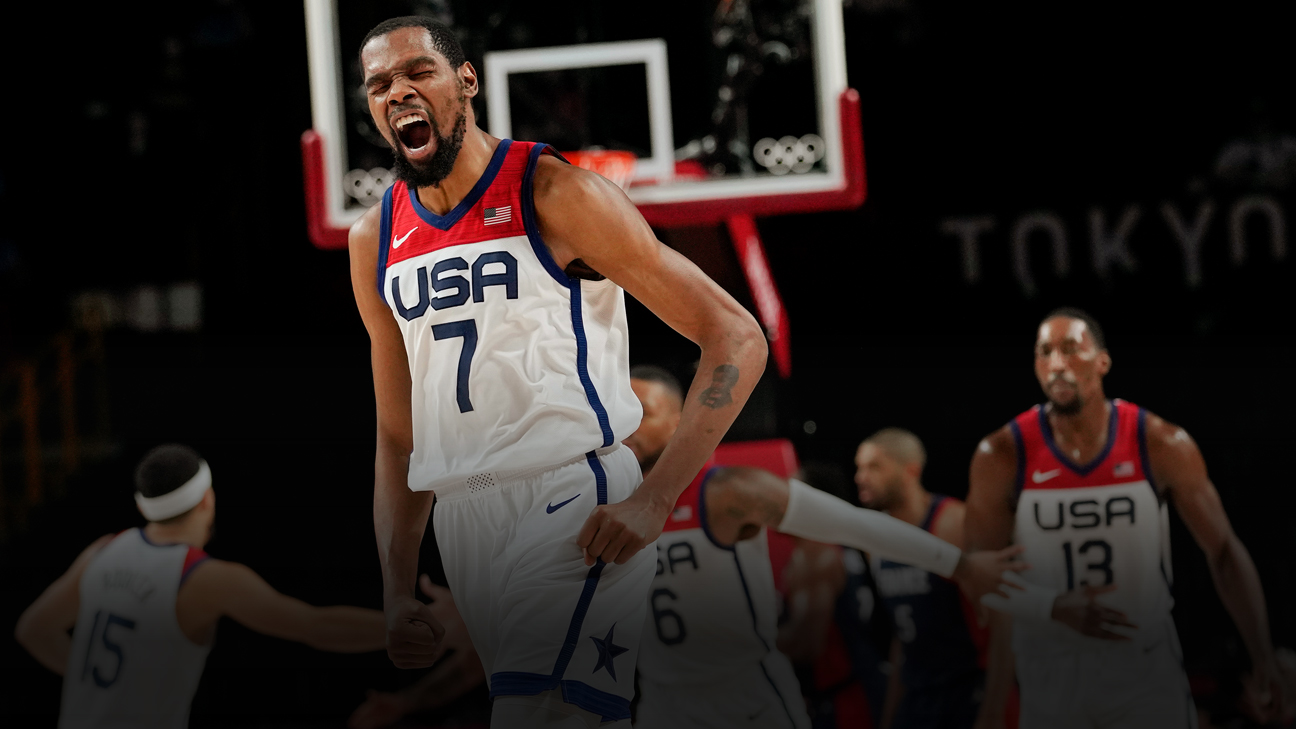 SAITAMA, Japan -- There have been more dominant, more talented and more celebrated Team USA squads than the group that came together for the Tokyo Olympics. But no national team has ever overcome as much adversity to win.

That will be the lasting memory of this group, and it will be a good one for American basketball as the U.S. men's team finished with a gold medal after a 87-82 win over France on Saturday. The record books will show it was the fourth consecutive gold for Team USA, but it was hardly routine.


As the Americans celebrated after the final buzzer, wrapping themselves in flags and one another in hugs, it wasn't just because they'd won the biggest prize but because they knew what led up to it.

No one had more perspective on it than Kevin Durant, who added a glorious chapter to his Olympic career by scoring 29 points to finish off a brilliant tournament. This was his third gold to go with two NBA titles. A few hours before the game, he agreed to a new $198 million contract with the Brooklyn Nets.

This one felt different to Durant, who wrapped himself in the American flag after avenging Team USA's loss to France earlier in the event. When he flew to Japan with his teammates less than three weeks ago there were only eight of them on the plane, and no one knew how or if they could come together after some downright shaky play.

"This is one of those special journeys," Durant said. "When you're a part of a team that's evolving by the second, it's amazing to see. Each game we continued to grow. I'm grateful we all committed to it, we stuck with it and we finished it off."

Durant scored 21 of his 29 points in the first half, relieving the stress on a team that was facing a bruising French team that had a big size advantage and intended to use it. Durant was a target as France forced switches that repeatedly got Durant on 7-foot-2 center Rudy Gobert, a move intended to get Durant in foul trouble.

Gobert drew nine fouls in the game, and Durant had to take three of them. But Team USA head coach Gregg Popovich was willing to play the percentages, as Gobert, a weak free throw shooter, went just 6-of-13 at the line. Gobert finished with 16 points but wasn't able to be a difference-maker.

That went to Durant, who exhausted himself early as he hunted for shots while looking to get the U.S. out to a lead. Once again the Americans struggled shooting in the first half -- they were just 4-of-18 from 3-point range, making it 10-of-48 in the first half of the past three games -- and it was Durant who saved the day.

"KD is not special because he's so talented. The way he works on his game is more impressive," Popovich said. "The relationship he builds with teammates, the respect he garners, the joy he has in playing, it's like osmosis. It goes into all the players."


Durant's teammates were eager to give him credit, which he characteristically tried to shrug off.

"Kevin Durant is exactly who we thought he was," said Draymond Green, who won two titles with him in Golden State as well as the 2016 Olympic gold. "He's one of the greatest players to ever play this game. One of the most special guys you've ever seen lace their shoes up and take a basketball court."

USA Basketball executive director Jerry Colangelo, who is retiring from the post after 16 years, was in tears after the game discussing what Durant has meant to the program.

"He is a very special guy. He loves the game. He loves USA basketball," Colangelo said. "He's got that kind of character."

With Durant showing some wear in the second half, Jayson Tatum played his role as scorer off the bench perfectly. France came back in the fourth quarter to beat the U.S. both in the 2019 World Cup and in pool play last month, but Tatum helped hold off another charge Saturday.

He made two clutch 3-pointers in the fourth and finished with 19 points.

Another French thorn has been guard Evan Fournier, who had 28 points in the victory over the U.S. two weeks ago and was a big part of the game plan Saturday. But this time the U.S. had an in-rhythm Jrue Holiday, who closed out an incredible summer with one last great defensive performance.


Fournier specializes in sneaking open for spot-up jumpers, but Holiday smothered him and finished with three steals and a block. But the numbers alone don't capture how important Holiday was to the overall defensive effort, as he repeatedly knocked the French from their sets and kept Fournier at bay.

Fournier ended with 16 points on just 5-of-15 shooting.

Holiday and Milwaukee Bucks teammate Khris Middleton became just the fifth and sixth players to win the NBA title and the gold medal in the same summer. The others are Kyrie Irving, LeBron James, Michael Jordan and Scottie Pippen.

"I guess me thinking about it and me telling the story, that's a hell of a summer," Holiday said.

The victory was also a moment for Popovich. This was a stressful summer for the legendary coach as late roster changes and the last-minute arrival of three players from the NBA Finals zapped his preparation time. He was left scrambling to piece together strategies while dealing with heavy pressure to keep the gold-medal-winning streak together.

"Every championship is special, every group you're with is special, but I can be honest and say this is the most responsibility I've ever felt," Popovich said. "The responsibility is awesome, and I felt it every day for several years. I'm feeling pretty wiped out." 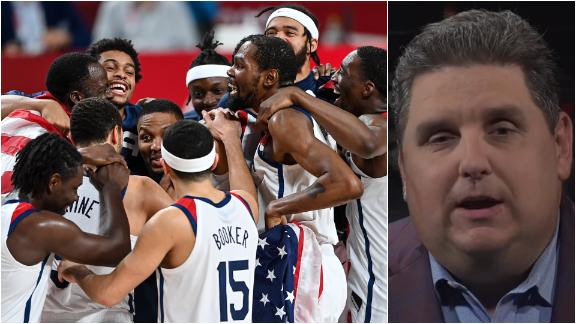 Windhorst: Team USA feeling accomplished after overcoming adversity
Brian Windhorst describes the atmosphere and feelings of the team as the U.S. won the basketball gold medal in Tokyo. 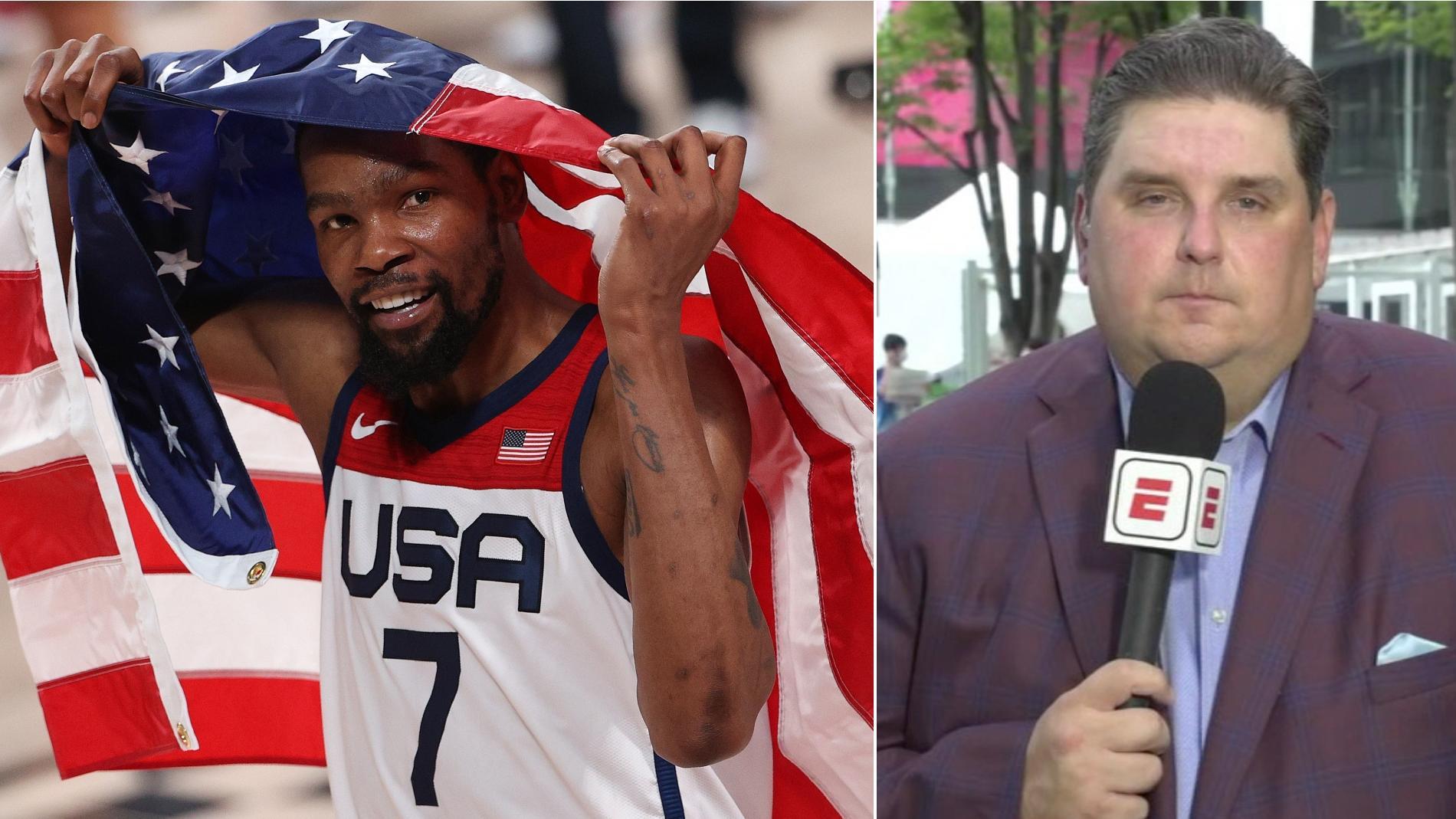