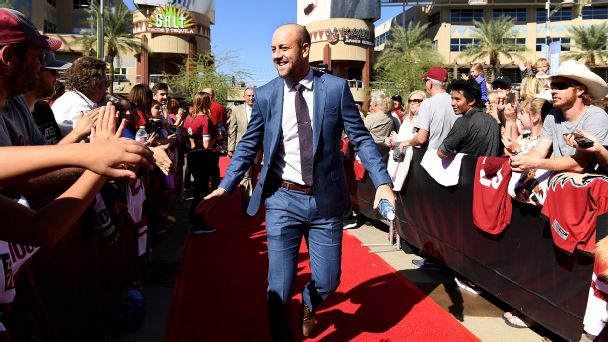 Derek Stepan was hanging out with his 2-year-old son, Max, in the front yard of his family's summer home in Minneapolis on June 23 when his phone rang. It was Jeff Gorton, the general manager of the New York Rangers, the only team Stepan had played for in his seven-year NHL career.

Gorton had news. Big news. The Rangers had traded Stepan, a 27-year-old center, to the Arizona Coyotes. Gorton thanked him for his time with the Rangers, and the tone was pleasant, but, all told, the call lasted maybe 40 seconds. Stepan and Max then went inside.

What had just happened, in a nutshell, was that Stepan had been traded for the first time in his professional career. But that phone call was really only the flip of a switch to an enormous and complicated lifestyle transition, to which Stepan and his growing family are still adapting.

"We still don't have all of our blinds up," Stepan said, referring to the couple's new home near Phoenix.

Stepan was not surprised that he had been traded, and the destination was not a stunner, either. His name had popped up in trade rumors with Arizona in 2016. The Coyotes and Rangers had made a big trade in 2015 that sent defenseman Keith Yandle to New York.

"Certain teams in the league kind of work together a bit," Stepan said.

The trade sent Stepan and backup goaltender Antti Raanta to Arizona in exchange for defensemanAnthony DeAngeloand a seventh-overall pick in the 2017 draft, which the Rangers used later that day to select Lias Andersson, a center from Sweden.

Stepan already knew that an athlete who gets traded does not simply show up in his or her new city and resume playing as usual. The Rangers had acquired veteran forward Martin St. Louis from the Tampa Bay Lightning in March 2014, for example, and St. Louis did not score in his first 14 games.

"I watched them come in," Stepan said of St. Louis and Yandle, "and I wouldn't say it was a struggle with going through the transition, but it was a transition. It's been the same with me. I'm working at it, but it's kind of been what I expected."

But there was another impending life event. Stephanie was also pregnant with the couple's second child, a daughter born Sept. 21. When Stephanie found out during the season that she was expecting, she told Derek, "You know this is the summer we're going to get traded."

After he got off the phone with Gorton, Stepan talked to his agent, then took a call from John Chayka, the Coyotes' general manager. The conversation with Chayka was much less emotional than his "kind of a downer" conversation with Gorton. Stepan had been in the organization since the Rangers drafted him in 2008, and Stepan loved playing in New York.

"But John put me and my family in a comfortable spot," Stepan said. "You see all the positives."

The trade happened on a Friday. The following Monday, he contacted a real-estate agent about putting up for sale the couple's house in Westchester County, New York, not far from the Rangers' practice facility in Greenburgh. Stepan then started looking for a house in Phoenix.

The couple was going to be in New York for a wedding in early July anyway, so they dropped by their house there with a stack of Post-It Notes, separating their belongings into two piles -- one would go to Phoenix, the other to their home in Minnesota. The Coyotes paid to move the Phoenix pile; the Stepans paid to move the Minnesota pile.

They closed Aug. 15 on a $3 million home in what the Arizona Republic reported was the "posh Silverleaf neighborhood of north Scottsdale's DC Ranch." That the transaction was so public was one sign that Stepan was no longer a Broadway Blueshirt, an athlete in a huge entertainment capital.

"In New York, there's so much going on in the bigger scheme of things -- NHL players are in the middle," said Stepan, who is signed through the 2020-21 season. "There are people higher up in the food chain in New York. I've never seen it before like that, but it happens."

They were settled in their new home in about a week, which was plenty of time for Stepan to be ready physically for the start of training camp on Sept. 14. Then Stephanie gave birth to their daughter a week later, making for an even more hectic month before the season.

"Everybody always says that the first kid is harder than the second kid, but that's a lie, too," Stepan said, laughing. "I know everybody says this, but my wife is the greatest of all time. I don't really know to say this, but she's transformed into a supermom."

Stepan did catch one break, in a sense, because the Coyotes have a new coach -- the former grinding forward and Pittsburgh Penguins assistant Rick Tocchet -- and several new and young players, so he started from roughly the same place as everyone else.

His game-day routine at home has definitely changed. While with the Rangers, after he moved from Manhattan to the suburbs, Stepan would catch a 7:49 a.m. train to the city for the morning skate at Madison Square Garden. He'd catch an afternoon nap at a nearby hotel, then would either get a car service home or a ride from his wife after the games. Now he just goes home after a skate.

"My wife is still nursing, so there's still not a whole lot I can do," he said.

The transition has not been carefree. Ryan McDonagh, the Rangers stalwart defenseman and captain, was a teammate of Stepan's at the University of Wisconsin, then a Rangers teammate for seven years. Each served as the best man at the other's wedding.

After Stepan was traded, he tweeted, "It was an unforgettable ride and something I will cherish forever."

Stepan said recently, "If anyone tells you that it's not hard after seven years, they're lying to you. At the same time, it is a business. I'm completely involved with Arizona Coyotes hockey. With all respect to the Rangers, I have to move on."

The Coyotes lost their first five games (they are 0-4-1), including two to the expansion Vegas Golden Knights, but Stepan sees many bright spots. The first two home games drew a total of 30,709 fans, nearly 90 percent of capacity -- not quite Garden sellouts, but loud and enthusiastic crowds, he said.

He remembers it was 110 degrees outside when the family moved to Phoenix, a sharp contrast from New York City with its "skyscrapers and winter," he said. The setting is different, but hockey is still hockey.

As soon as the Coyotes' schedule came out, he did check to see when the Coyotes will play at Madison Square Garden. He won't have to wait long; Arizona plays in New York onOct. 26 in the second of a five-game road trip that includes stops in New Jersey and Brooklyn.

Stepan surely will receive hearty applause when he plays against the team for which he scored 128 regular-season goals and 19 playoff goals, including one at home that beat the Washington Capitals in overtime of the Game 7 of a 2015 second-round playoff series.