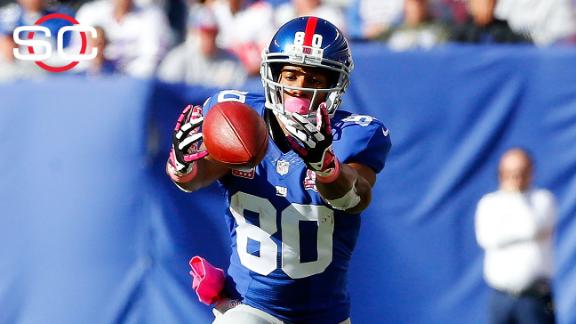 EAST RUTHERFORD, N.J. --New York Giants wide receiver Victor Cruz is continuing to make progress in his recovery from the serious knee injury that ended his 2014 season and believes he will be ready to play Week 1 in Dallas against the Cowboys.

Cruz tore his patellar tendon Week 6 in Philadelphia and missed the rest of the season following surgery.It marked the second straight year that his season was cut short by a knee injury. He was limited to 14 games in 2013 because of surgery on his left knee.

His recovery is intense and extensive. He said Thursday that he had been doing straight-line running and expected to have to do that for a month before he would be allowed to try cutting, and that he's following the team trainers' plan for him and evaluating as he goes along.

"He's scheduled to be back by the opener for us," Giants GM Jerry Reese said Thursday, before reiterating his statement from the scouting combine that the Giants can't be certain about getting Cruz back on the field until he actually is.

In the meantime, Cruz is enjoying the return to the Giants' facility this week of his teammates, including fellow receivers Odell Beckham Jr. and Rueben Randle. In the second year under offensive coordinator Ben McAdoo, the Giants' offensive players have high hopes. Cruz joked that if he gets one more question from fans about how good the offense can be with him and Beckham healthy together, he's "going to jump off a building." But he said it with a smile and agrees that it's an exciting idea.

"Knowing we have so many weapons and just to know I can be a complement and not have to be a focal piece, that helps me mentally when I do get back out there," Cruz said.