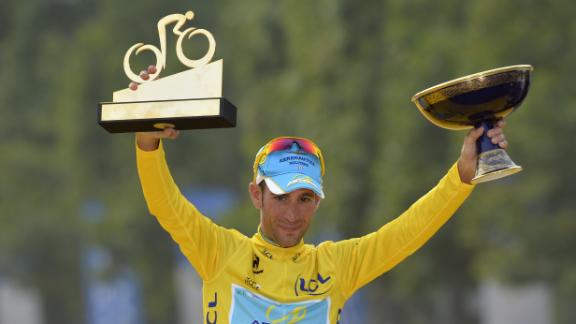 PARIS -- Vincenzo Nibali won the Tour de France on Sunday, becoming the first Italian in 16 years to triumph in cycling's greatest race by chiseling a lead over his main rivals a few seconds at a time and dominating them in the mountains.

The 29-year-old Sicilian, who called himself "a flag-bearer of anti-doping" during the race, finished in a bunch behind Marcel Kittel, who won the 21st stage in a sprint finish.

Nibali's victory comes after the pre-race favorites -- 2013 champion Chris Froome and two-time winner Alberto Contador -- crashed out with injuries in the first half of this year's Tour.

Astana team leader Nibali is only the sixth rider to win all three Grand Tours -- France, Italy and Spain. The last Italian to win the Tour de France was Marco Pantani in 1998.

After cruising in 24 seconds after Kittel -- a German who got his fourth stage win -- Nibali received pats on the back, kissed his wife and infant daughter, and was mobbed by cameras as race organizers hustled him away to prepare for the awards ceremony.

"Unbelievable," said Kittel, whose victories bookended this Tour. He won Stage 1 when British rival Mark Cavendish crashed out in the final sprint.

Nibali won four stages -- a feat not equaled by a Tour winner since Lance Armstrong won five a decade ago. The Italian wore the yellow jersey for all but two stages since Stage 1. His 7 minute, 37 second margin over runner-up Jean-Christophe Peraud equals that of Armstrong over Swiss rider Alex Zulle in 1999 -- a result nullified for doping. Before that, the biggest margin was that of Germany's Jan Ullrich: He beat second-placed Richard Virenque by just over 9 minutes in 1997.

In one of the subplots of this race, Peraud and third-placed Thibaut Pinot became the first Frenchmen to reach the Tour podium since Virenque in that year -- a fact not lost on many homegrown fans. Pinot was 8:15 behind.

But such comparisons, many cycling insiders have noted, miss the mark. Armstrong, Ullrich and Virenque were three of the big-name riders caught in nearly a generation of doping scandals in cycling. Armstrong, in the biggest scandal ever in the sport, admitted to doping and was stripped of his record seven Tour titles.

Nibali and many others in the peloton say that era is past. But his own victories in the 2010 Vuelta and the Italian Giro last year were tarnished by high-profile doping cases involving other riders. While cycling's governing body, the UCI, has made great efforts to halt use of drugs and other performance-enhancers, such as through the biological passport program, few cycling observers believe the pack is fully clean.

Many naysayers may argue that Nibali was the best of the riders still in this Tour. Colombia's Nairo Quintana, who won the Giro d'Italia in May, did not ride. Bradley Wiggins, the 2012 Tour champ, was passed over so his Sky Team could focus on Froome. Then Froome and Contador pulled out due to injuries.

But even before they left, Nibali had gained a 2-second advantage on them by winning Stage 2, surprising even himself. Then, in Stage 5 after Froome crashed out, the Italian excelled on cobblestone patches that slowed down Contador, who lost more than 2½ minutes to Nibali. The Spaniard was forced into a need to attack.

On a downhill in Stage 10, Contador crashed and fractured his tibia. But Nibali, who is known as "The Shark of the Strait" -- a nod to the waterway near his hometown of Messina, Sicily -- didn't stop there. He went on to win that stage into La Planche des Belles Filles. It was the first of three stages with uphill finishes that he won, adding one in the Alps (Chamrousse) and another in the Pyrenees (Hautacam).

Nibali said this Tour layout, announced last fall, "was almost made to measure for me."

Tejay van Garderen, the highest-placed rider from the United States, said on Twitter this was the hardest of the four Tours that he's competed in.

Of the 4 tours I've ridden, this one has been the hardest. Congrats to everyone who made it. #paris #TDF

The 101st edition began in Yorkshire, England, and guided riders over 3,664 kilometers (2,277 miles) including cobblestones, wind-swept flats and climbs in the Vosges, Alps and Pyrenees.

With the Arc de Triomphe in Paris as the backdrop, other riders getting TV time on the winner's podium included Peter Sagan of Slovakia, winner of the green jersey given to the race's best sprinter; Rafal Majka of Poland, the best climber; and Pinot, the best young rider born since the start of 1989.