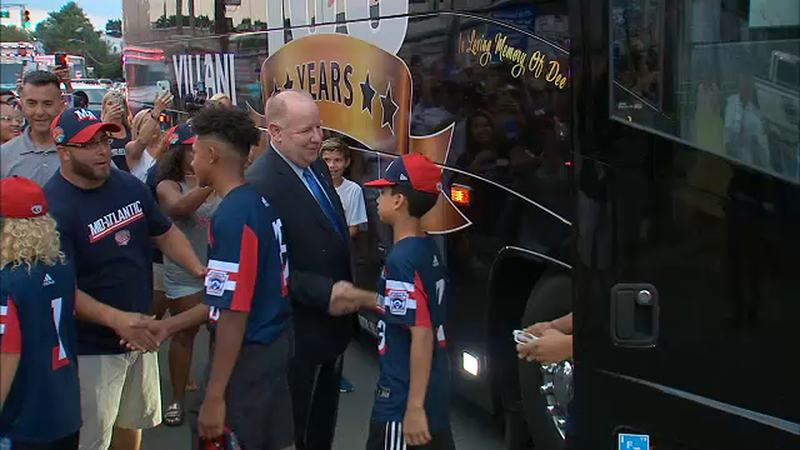 ELIZABETH, New Jersey (WABC) -- Residents of Elizabeth saluted their hometown heroes Thursday night with a welcome home rally for the team that made it to the Little League World Series.

The Elmora Youth Little League organized the rally for the Elmora Troopers, who were knocked out of the double-elimination tournament Wednesday when they lost 4-1 to a team from River Ridge, Lousiana.

The Elmora Troopers from Elizabeth lost 4-1 to a team from River Ridge, Louisiana, Wednesday and were knocked out of the double-elimination tournament.

They won two games and lost two in the tournament, and their coach was proud of their amazing run.

After the team was eliminated, Elizabeth Mayor Chris Bollwage announced the city will throw the Elmora Troopers a parade on Friday, September 6, with details to be announced.

"You had a city behind you, the state of New Jersey," Labrador told the team after the game. "Elizabeth, New Jersey, is now known in the best light because of this group of boys. OK? Because of you guys and all the work you did...I just want to just thank you guys. I'm serious. Happy graduation day, boys. Go on and be superstars on the big field. It was an honor."

#EYL #Troopers proved that great things are happening in #Elizabeth the boy united our city and state we are so proud of there accomplishments #GreatRun cheer one more time #LetsGoTroopers 👏👏👏👏👏@FlavaFraz21 @MikeTrout @LittleLeague pic.twitter.com/0PZKJbIEGt

The team stayed alive Tuesday night by beating Rhode Island 2-0, breaking a scoreless tie by pushing across two runs in the top of the sixth inning as their pitchers held Rhode Island to just one hit.

The Troopers won in the Mid-Atlantic region to reach the Little League World Series and defeated Oregon in the opening game, 6-2, before losing to Hawaii 6-0.

"Honestly, as a grown man, it was emotional," Labrador said. "Because I know what it signifies and what it means to us and our league and what it represents."