Why Jason Pierre-Paul can return to dominance after amputation 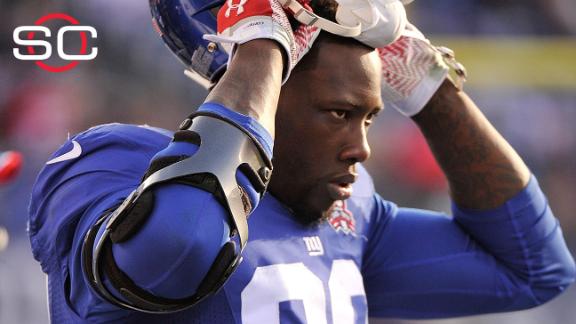 Nearly a week into training camp, the New York Giants remain uncertain when Jason Pierre-Paul will be able to return to the team.

Pierre-Paul has kept a low profile since the July 4 fireworks accident that led to the amputation of his right index finger and reportedly a thumb injury. Giants general managerJerry Reese said he spoke with Pierre-Paul on Sunday but declined to set a timetable for the star defensive end to rejoin the team.

It's a delicate situation for Pierre-Paul, who hasn't signed his $14.8 million franchise-tag tender, a tactic that gives him some negotiating leverage. Because once he signs, the team has the right to put him on the non-football injury list, and he could lose game checks. It's also crucial for the Giants in a competitive sense because Pierre-Paul's ability to rush the passer is key to their defense.

ESPN's Ed Werder reported Monday that a source who has spoken to Pierre-Paul said the two-time Pro Bowler is in good spirits and intends to play at some point this season. With that in mind, let's consider how significantly Pierre-Paul will be affected on the field by the injury.

Dr. Mark Adickes is uniquely qualified to opine on the Pierre-Paul injury. He's a noted orthopedic surgeon who played guard for six NFL seasons. Adickes, a medical correspondent for ESPN, is of the opinion that Pierre-Paul can return to his previous form by the 2016 season -- but the upcoming season could require some reorientation.

"You lose about one-third of your grip strength," Adickes said of the amputation. "It's got to have some effect. There's going to be an adjustment."

Loss of grip strength will make it more difficult for Pierre-Paul if he needs to bring an opponent down with just his right arm, and he might have to work harder to become disengaged from a blocker. It will be tougher for him to grasp an opponent -- which already isn't easy, because most linemen wear tight jerseys. It's also worth noting that the injury could initially affect Pierre-Paul's comfort level and possibly even his footwork when he uses his right hand in a three-point stance. Pierre-Paul's other fingers, however, will eventually become stronger as they compensate for the amputation, Adickes said.

Hand fighting is another area that could present challenges. But one thing working in Pierre-Paul's favor is that he doesn't rely heavily on the swim move to evade linemen, in which the loss of a finger could diminish his ability to clear a blocker's hands.

"He bull-rushes quite a bit," Adickes said. "You're pushing. Your arms are extended, and grip strength doesn't really come into play."

Problems with a damaged digit don't always end immediately after the amputation procedure, said ESPN injury expert and orthopedic specialist Stephania Bell. "There can be lingering pain issues after any amputation," Bell said, adding that certain aspects of recovery simply require time and patience. "You've got to retrain your hand."

Hall of Fame defensive back Ronnie Lott, who notably had the tip of a finger amputated during his playing days, emphasized the pain factor. "Anytime you get hurt around the foot or the hand, the pain is much different," Lott told "The Rich Eisen Show." "And so for [Pierre-Paul], the pain of going through the amputation, the pain of having it numb and then having it become un-numb and then the fact that when you go through all of that -- there is just so much pain. And then the pain of learning how to play with it and learning how not to play with it and learning the things you can do and the pains of struggling with it: All those pains to me are the things that make it really challenging."

Perhaps of greater impact to Pierre-Paul's performance than the amputation, however, is the thumb injury.

NFL Media's Kimberly Jones reported that Pierre-Paul had pins inserted into a broken thumb after the accident. If that report is accurate, recovery time for a thumb fracture can be anywhere from six to 12 weeks. Former Giants offensive lineman David Diehl tweeted in reply to Jones that he couldn't fully squeeze or grip for six weeks after he suffered a thumb fracture.

But the specific details and severity of the thumb injury haven't been reported. There could be multiple fractures and soft tissue damage. A source told ESPN's Dan Graziano that the surgically repaired thumb currently must be immobilized, and skin grafts to treat severe burns on the hand are healing. Further, unlike a hamstring pull or an ACL tear, where recovery timeframes are more established, there are far more variables when trauma and burns are involved. "It's not a one-size-fits-all injury," Bell said. "You don't even know what the exact injury was and all the nuances of the injury. But we know it was traumatic."

Oakland Raiders defensive lineman Justin Tuck, who played alongside Pierre-Paul for four seasons with the Giants, recently said he believed Pierre-Paul could rapidly get back to level at which he recorded nine sacks and 21 solo tackles in the final five games of the 2014 season. "Hopefully everything else is healthy around him," Tuck told the New York Daily News. "If that's the case, I see no reason he won't be the JPP of the second half of the season last year in this coming year."

Said Washington Redskins offensive tackle Trent Williams: "He's still got long arms, and he's still athletic. I don't know how much the finger will make a difference. ... I can't see it making him a different player. He still knows what he knows and he still has athletic ability."

Houston Texans linebacker Whitney Mercilus, who lost part of his left index finger after a weightlifting accident in college, agreed with Tuck's assessment. "The only thing that affected me was daily little things," Mercilus told ESPN's Tania Ganguli. "Typing, picking up coins. Losing an entire finger? I don't think that'll impact a player, especially on this level for a defensive lineman like Jason Pierre-Paul. He can still be productive. He doesn't need that finger."

Said Jacksonville Jaguars defensive end Andre Branch: "We all are off of leverage and hand placement and everything, so that's like asking a kicker to kick without his big toe. It's going to be a difference. I don't know how well he's going to do. I wish him nothing but the best. It's just an unfortunate situation. We get dislocated fingers and everything, and it heals and it comes back. But he doesn't have a finger. So it's going to be a transition, and it'll be good to see how well he does this year."

The road to recovery for Pierre-Paul won't be an easy one, but the consensus seems to be that he can still be a dominant player in time if he's able to make some physical adjustments. That is a reasonable expectation for Pierre-Paul, whose teammates have praised his work ethic.