Will the Maple Leafs or Islanders win the Stanley Cup first? 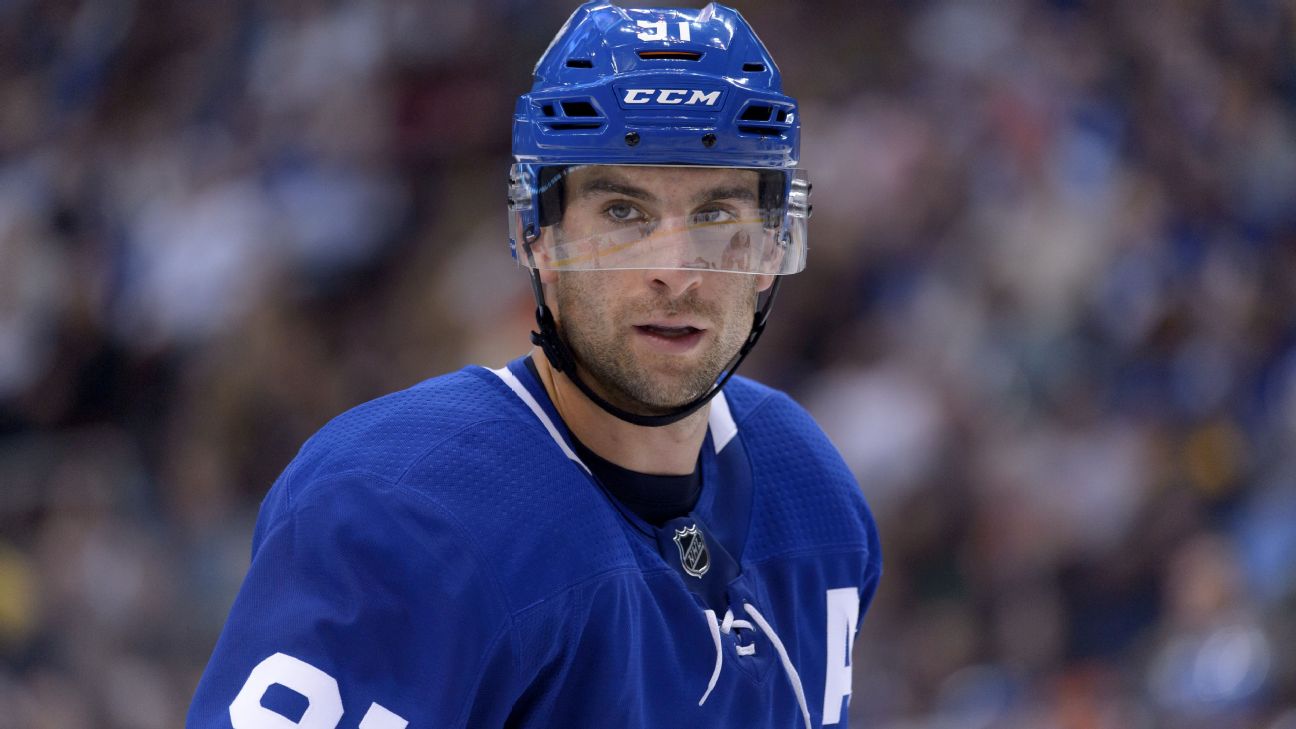 With John Tavares and the Toronto Maple Leafs squaring off against his former team, the New York Islanders, for the first time this season on Saturday night (7 p.m. ET on ESPN+), we ponder the big questions.

Who wins the Stanley Cup first, the Maple Leafs or the Islanders?

While the Islanders might just rise again, I've unfortunately become confident that with Brendan Shanahan and Kyle Dubas guiding Toronto, it's just a matter of time before we see John Tavares raise the Cup for the Maple Leafs. I'd say it happens within the next three years.

Emily Kaplan, national NHL reporter: I believe in Barry Trotz's ability to morph a raw group into a refined (and defensively responsible) unit. I know Lou Lamoriello's track record of building contenders. I love watching Mathew Barzal, a player who looks like he was built from the EA Sports lab. I also know the Islanders have a deep pipeline of talent to support him.

But have you seen the Maple Leafs play this season? New York is going to get there, but it's going to take time. Toronto's Cup window has sprung open. They have the gaudiest forward group in the league, a goaltender in Frederik Andersen that is capable enough, and the urgency of impending salary cap hell to get it done soon. The Islanders could win within the decade. Toronto should win in the next two to three years.

Dimitri Filipovic, hockey analytics writer: I know it's en vogue to look ahead to Toronto's upcoming financial situation and question how they'll manage to make all of the pieces fit under the salary cap, but it's important to remember that's ultimately a pretty good problem to have. The reason that's even a discussion in the first place is because they happen to be blessed with a number of tremendous young pieces that are all going to be earning their big paydays.

Having to potentially go through the Bruins and Lightning in consecutive rounds just to reach the East finals looms as an awfully tall task, but if anyone has the firepower to blast through that roadblock, it's them. They have a goalie that will likely be a Vezina Trophy finalist, a defenseman in Morgan Rielly that is making a strong case to be a Norris Trophy finalist, three legitimately potent scoring lines that they can roll out without concern and one of the most lethal power plays in the league. That's quite a formula for success. Purely because of proximity to contention in the present, the Leafs have to be the answer here.

Has John Tavares exceeded expectations or underwhelmed in Toronto?

Wyshynski: Exceeded. There's a reason legions of "Good Ontario Boys" have decided not to return home to play for the Leafs. The expectations are higher than the CN Tower, especially when one signs a $77 million contract. The pressure can be crushing. Friends and family are constantly bugging you for stuff. But that hasn't happened to Tavares in Year 1. He's on track for 56 goals, which would blow away his previous career best of 38. He's been a point-per-game player twice in his career before when playing over 80 games; it would be a stunner if he didn't crack that ceiling if he plays 80 this season. Better than advertised.

Kaplan: When you're a forward with a max contract, you're expected to put up league-leading numbers. Entering the Christmas break, only Alex Ovechkin and Jeff Skinner had scored more goals than Tavares' 24, and Tavares added two more on Friday night.

But Tavares is exceeding expectations because he's making everyone around him better, too. Mitch Marner went from ascending talent to a surely multimillion dollar man by playing alongside Tavares (Marner is the only Maple Leafs player ever to have 50 points before Christmas). Tavares has shouldered the media scrutiny (and initial flurry of speculation about the captaincy) with grace. He also helped this team level up. As Nazem Kadri told the Toronto Sun this week, when Tavares signed his contract, there "was a message to us that we could be serious contenders. That message was definitely received."

Filipovic: He's currently on pace for 56 goals and 95 points, both of which would easily become new career bests. We're not even halfway through the regular-season schedule and he's already bested his 5-on-5 goal total from last season. All of his per-minute metrics have seen a significant uptick as well, suggesting that he's doing more with less, at least when it comes to usage, though not necessarily based on the quality of his teammates. The fit alongside Marner has been a match made in heaven, with the two immediately having carried the Leafs' offense to a larger degree than was expected because of Auston Matthews' injury and William Nylander's holdout. Considering that Marner is likely the most talented pure playmaker he's had on his wing full time, it isn't all that surprising that Tavares is racking up the goal totals that he is. He has personally directly set up 12 of Tavares' 19 5-on-5 goals and 16 of his 26 total tallies. That shouldn't diminish Tavares' individual performance though, because he's been every bit as good as advertised.

Sachin Chandan, ESPN The Magazine researcher: Tavares has exceeded expectations, as he's on pace for his best season. If he does score 56 goals, as Greg mentions, it would be second-highest single-season total in Leafs history. He's scored or assisted on 30 percent of all Leafs goals, leads the NHL in 5-on-5 goals and is averaging 3.71 shots per game, the highest rate of his career. His presence has elevated teammates Marner, who has assisted on 16 of Tavares' 26 goals, and defenseman Morgan Rielly, who has assisted on 10. His shooting percentage is abnormally high, however, at 18.4 percent, so there should be a little regression. Tavares' legacy will be tied to how late he plays into June, but for now he looks like the offensive engine Toronto wanted.

Are you more or less confident that the Islanders will be OK without Tavares?

Wyshynski: Tough question. I'm confident in Barry Trotz and his merry band of coaches getting the best out of whatever group is given to them. I'm not as confident in Lou Lamoriello circa 2018 building a tangible winner with total autonomy rather than being in a brain trust like in Toronto. As it stands, this Islanders team still feels gutted, built around a franchise player that's no longer with the franchise. But there's a ton of help on the way via their prospect pipeline. I guess in the end I'd say "more confident," but that's only because the initial feeling of devastation has subsided.

Kaplan: I had doubts about the 2018-19 Islanders, especially when it looked like Lamoriello may have lost his mind this summer and signed every available fourth-line center on the market. But nearing the halfway mark of the season, these Islanders have made me feel silly. Yes, they've been a bit lucky with the league's third-highest PDO (shooting percentage plus save percentage). But the defense is so much less leaky under Trotz (they've let, on average, about one less goal per game), and the core was more self-sufficient than I gave them credit for. They'll be alright after all.

Filipovic: They've certainly been better than we had any reason to believe they'd be prior to the season, based on the summer they had. With Trotz behind the bench, they've completely tightened things up defensively after a year from hell in their own zone last season. The combination of that and the top-flight goaltending they've received from the combination of Thomas Greiss and Robin Lehner at least gives them a chance to compete every night.

With that said, I'm not ultimately sure how far that gets them in the short-to-medium term. The structure and system being integrated are one thing, but until they have better talent sprinkled throughout the lineup, there's only so much they can do with it. It's not completely sour grapes to suggest that they dodged a bullet not having to pay Tavares $11 million per season well into his 30s, but they'll still need to eventually find a way to replace that talent that walked out the door. The good news is that they a) drafted remarkably well last summer and have some interesting prospects on the way, b) have financial flexibility to get creative with and potentially make a splash this summer, and c) done a heck of a job of saving face and not completely cratering like many expected they would after being left at the altar by Tavares. All in all, it's hard to view the first three months of life without John Tavares as anything other than cautiously encouraging. But there's still plenty of work to be done before that caveat can be lifted with any real confidence.

Chandan: My confidence in the Islanders is more so about Trotz, whose teams tend to be defensively stout. The Islanders gave up the most goals last season; this season, they have surrendered the second fewest. While Greiss and Lehner might be playing unsustainably well in goal, it's clear that this team has addressed it's biggest weakness. They could take another step forward next season, as they feature five prospects in our top-100 list, and project to have $31 million in cap space for 2019-20. Unsurprisingly, their biggest need will be a top goal scorer.