Will the Yankees' crumbling rotation sink them in October?

ESPN
By David Schoenfield
This might seem like a strange game to write this off, considering the New York Yankees bashed five home runs in beating the Baltimore Orioles 9-6 at Camden Yards on Monday, creating a bunch of home run-related trivia:

The Yankees have now hit 32 home runs in eight games at Camden this season, the most ever for a road team in one stadium. And they still have two games to play in this series.

The Orioles have allowed multiple home runs in 10 straight games, an MLB record (via Elias).

As Sarah Langs noted on Twitter, the Orioles have allowed five or more home runs in 15 games now. Before the 2019 Orioles, no team had done that more than nine times in a season. Ouch.

But my takeaway from this game: Masahiro Tanaka struggled again, as he allowed 10 hits and five runs in 5 innings, and the concerns about the Yankees' rotation continue to mount. Over his past seven starts, Tanaka has allowed 48 hits and 36 runs in 31 innings, a 10.23 ERA. Based on his good work over the past two postseasons, Tanaka would be the prospective Game 1 starter to begin the playoffs. Yankees fans, are you ready for Tanaka to start the postseason opener?

Maybe the ball instead goes to Domingo German, who has been the best starter throughout the season. Even he has been inconsistent of late, however, with a 5.55 ERA over his past nine starts (sandwiched around a stint on the injured list) that includes 16 home runs allowed in 48 innings. Do you want him to face the power-hittingMinnesota Twins, who are going to set a single-season record for home runs?

James Paxton has electric stuff. He has a 4.61 ERA and starts this season allowing seven runs (twice), six runs (twice) and five runs (once). He has pitched fewer than five innings in eight of his 19 starts. I guess in the playoffs he won't have to pitch deep into a game anyway.

Before we discuss Luis Severino, let's at least get him throwing off a mound and into game action.

So what does manager Aaron Boone do? For now, his hands are somewhat tied. You have to stay the course because you don't want to burn out your bullpen in August when you have a comfortable lead in the division -- and, thanks to the offense and bullpen, you're still winning games. Still, it's no fun burning through your four best relievers on a Monday night against the Orioles.

In September, however, if the rotation is still struggling and there are more relief arms available with expanded rosters, look for a little more experimentation. Boone has already shown himself amenable to the opener, something Chad Green has done nine times this season. Maybe it's worth trying somebody else in the role as well, maybe Tommy Kahnle or Luis Cessa or hot-shot prospect Deivi Garcia. Boone could try some "tandem" starts, pairing Sabathia with Tanaka, for example, with each going three innings, just to get a feel for it.

Or maybe that all sounds like too much panic for a team with a six-game winning streak, a nine-game lead in the division and a .652 winning percentage. Then again, the Yankees won't be playing the Orioles in October.

Twins win in dramatic style: Good interleague game between first-place teams that Miguel Sano ended with the first pinch-hit walk-off home run for the Minnesota Twins since Michael Cuddyer in 2006:

I love how Ronald Acuna Jr. didn't even look at the ball, just starting walking into the dugout. That's when you know you gave up a long one. Official distance: 443 feet. Give or take, I guess.

The home run came off new Braves reliever Chris Martin. To recap the past three days for the Atlanta Braves bullpen:


Sunday: Greene loses it on a three-run homer.

Monday: Martin loses it on a two-run homer.

The Braves were applauded for picking up Greene, Martin and Mark Melancon at the deadline, and not to overreact to three games, but it was also unlikely those three were going to continue pitching as well as they were. Consider:

Melancon: Coming over after 8 consecutive scoreless innings with the Giants, probably his best stretch of pitching since 2016 (he's had two scoreless appearances for the Braves).

I still like what the Braves did, but relievers are volatile and unpredictable.

Added note: In a curious move, the Reds claimed Kevin Gausman off waivers, presumably with the idea of adding him to their rotation in 2020 (although he's a non-tender candidate as well). Gausman had made three starts coming off the IL: one good one versus the Nationals (one run, eight K's in 7 IP); a three-homer game at Philly; and five runs allowed in 4 innings against the Reds. He had 21 K's and three walks in the three outings. Mike Foltynewicz will return from Triple-A, where he had a 1.13 ERA his past three outings to take Gausman's place in the rotation. General manager Alex Anthopoulos said the Braves considered moving Gausman to the pen, but the addition of the three relievers left no room. Unstated: The Braves will save about $2.85 million in salary.

Small ball fails Indians: Interesting bottom of the ninth in Cleveland with the Indians trailing the Rangers 1-0. Jose Ramirez led off with a double off Jose Leclerc. That brought up Tyler Naquin, who had the platoon advantage against Leclerc and has hit well of late (a .368 average since the beginning of July). Terry Francona had Naquin bunt, however, and while Naquin advanced Ramirez to third base, Ramirez failed to score onJason Kipnis' grounder to first base with the infield pulled in, and then Franmil Reyes lined out to center field.

Was playing for the tie the right call? I'd have let Naquin swing away, although he may have been bothered by sore ribs (he entered the game only because Jordan Luplow had injured himself stealing third in the seventh inning). Aesthetically, I like that Francona bunted there; we see so few one-run strategies anymore that a sacrifice bunt in an American League game these days always feels like a surprise. Strategically, here's the general run-scoring matrix from Baseball Prospectus for 2019:

Of course, that doesn't take the particulars of the pitcher and hitters into consideration. If you're generous to Francona, you can call it a coin flip. It probably shouldn't be a surprise that Francona bunted there, however: The Indians led the AL with 27 sacrifice bunts entering Monday, compared to a league average of 11 per team. Baseball-Reference tracks a league-adjusted bunt rate for managers, based on potential opportunities, and Francona's 199 rate (99% higher than average) is the highest of his career. He has been above average in six of his seven seasons with Cleveland. With Boston he was below average in seven of his eight seasons. Different lineups, different eras, but Francona has shown himself a little bit old-school in this Year of the Home Run. It just didn't work on this night.

Meet the Mets, meet the Mets ... because the Mets are really sockin' the ball, knocking those home runs over the wall! I hope all those Mets beat writers are taking lots of extra notes this season -- you know, just in case they want to strike some book deals after the Miracle Mets of 2019 win the World Series.

OK, OK ... maybe we're jumping a little ahead of ourselves. But the Mets swept a doubleheader from the Marlins at Citi Field to climb over .500 for the first time since May 2. The nightcap win came in dramatic fashion as the Mets won 5-4 with three home runs in the seventh inning off Miami reliever Jeff Brigham -- including Michael Conforto and Pete Alonso going back-to-back with two outs:

The Mets are 17-6 since the All-Star break, the best record in the majors. According to FanGraphs, their playoff odds have improved from 5.9% at the break to 33.2%.

Yelich goes yard ... twice The Brewers beat the Pirates 9-7 as Christian Yelich smacked home runs 38 and 39. This seems like a good time to list the single-season Milwaukee home run leaders (with * meaning he led the league): 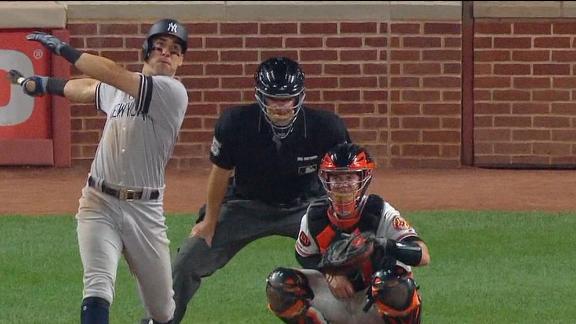 Tauchman knocks two homers in Yanks' win
Mike Tauchman hits a pair of home runs as the Yankees use the long ball to top the Orioles. 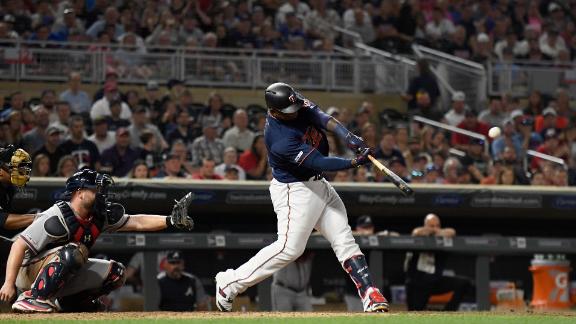 Sano wins game with a walk-off HR
Miguel Sano rewards the Twins with a pinch-hit, walk-off two-run home run to beat the Braves 5-3. 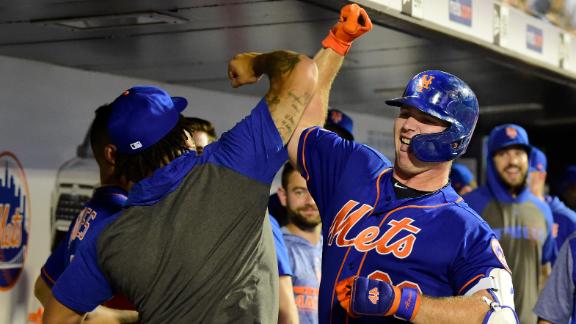